A regional daily has backed hospital chiefs’ calls for more respect to be shown to healthcare workers on its patch.

The Gazette, Blackpool, has urged readers to show their support for doctors and nurses over the winter in a plea on its front page.

Its rallying call comes after accident and emergency staff at Blackpool Victoria Hospital were honoured for their heroism at an annual awards ceremony earlier this month.

The paper’s deputy editor Andy Sykes said that behind sometimes damning statistics are people who work “ridiculously hard” for the NHS. 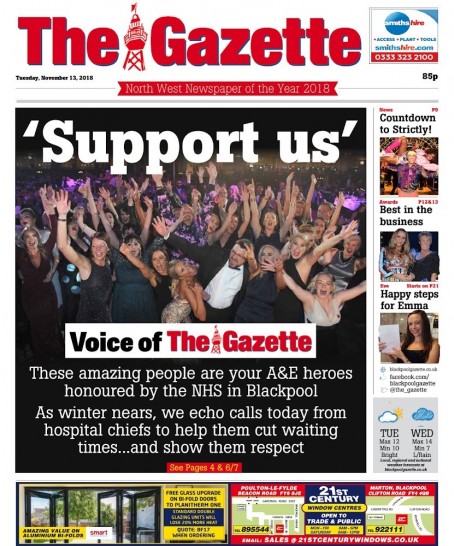 Deputy editor Andy Sykes told HTFP: “Blackpool Victoria Hospital was last year shamed as one of the worst in the country for waiting times at A&E, particularly during winter. The Gazette has been robust on holding those in power to account over the damning figures.

“But behind the statistics are real people who work ridiculously hard under immense pressure to care for our residents. The Celebrating Success Awards, which I attended at Blackpool’s Empress Ballroom, showcased the efforts staff go to day in, day out to make a difference.

“It was humbling to see the joy on the faces of the A&E staff when they heard they had won the Chairman’s Award. Coupled with a great picture from photographer Rob Lock, we worked with the hospital to combine this success with a plea to residents to help support the A&E staff as winter approaches.

“Local newspapers can play a huge part in helping spread the message to readers over where the best place is to get the best treatment – and help reduce those waiting times.”

Andy added: “We followed it up the following day with a ‘cut out and keep’ guide to health services on the Fylde coast. We will also be producing a series of human interest features on the people who keep A&E ticking as the weather worsens, in a bid to keep hammering home that message.

“It shows how local newspapers and local organisations can work together on a matter of huge importance and we are delighted with the response so far.”