Special editions and supplements marking two decades since the Good Friday Agreement was signed have been produced by Northern Ireland’s dailies.

Belfast-based titles The News Letter, Belfast Telegraph and the Irish News have all covered the 20th anniversary of the agreement, which helped bring an end to 30 years of sectarian violence in the region known as The Troubles.

The News Letter, which is largely read by Northern Ireland’s unionist community, “emphatically” endorsed the deal at the time it was agreed at a time when it was not supported by the majority of unionists.

The Johnston Press-owned paper ran a 12-page special supplement this morning, and republished two of its front pages from the time. 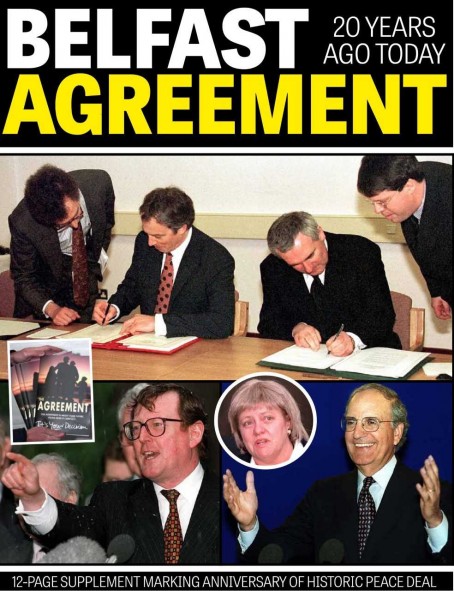 The supplement featured contributions from all of the main political parties, including a 4,000 word exclusive piece from the then Ulster Unionist leader David Trimble.

Editor Alistair Bushe told HTFP: “Other contributors included Gerry Adams of Sinn Fein, Peter Robinson of the DUP, Mark Durkan of the SDLP and Sir Jeffrey Donaldson, who walked out of the talks process over the controversial proposals on prisoner releases and later left the Ulster Unionists for the DUP.

“We also looked back on how the News Letter covered the signing of the agreement in April 1998, and republished two front pages from the time which saw the paper emphatically endorse an accord which was not supported by a majority of unionists.”

The Telegraph, also traditionally a unionist paper, ran an eight-page pullout as part of a special edition which also feature news, comment and analysis on 14 pages. 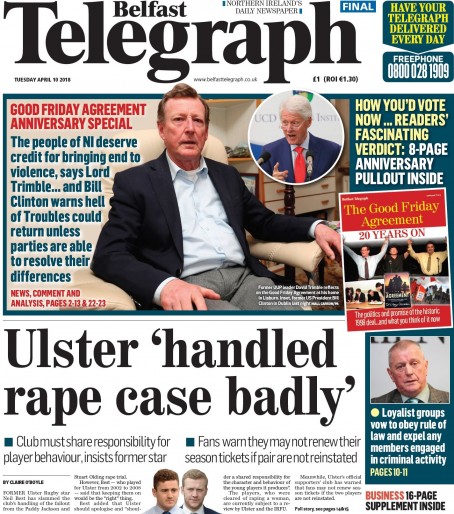 The News, which is perceived as offering a more Irish nationalist outlook, also provided a total of 21 pages of coverage in print over recent days.

Editor Noel Doran said: “This was a major occasion for our paper, particularly given the role we played, and our close links with the News Letter, before and after the signing of the agreement.

“We have also had to report on the latest upheaval at Stormont institutions, but the joint appearances in Belfast by Bill Clinton, Tony Blair and Bertie Ahern give us a huge opportunity to reflect on all the developments of the last two decades.”