A couple inadvertently named their new baby girl after a newspaper based almost 200 miles from their home.

Brendan Davies and Emma Langley, who live in Street, Somerset, welcomed their daughter into the world on 21 December.

The girl was named ‘Harlow Star’ by the pair, who had no idea their newborn would be sharing her name with an Essex weekly.

Mr Davies admitted he had never heard of either the town of Harlow or the Star when the name was chosen. 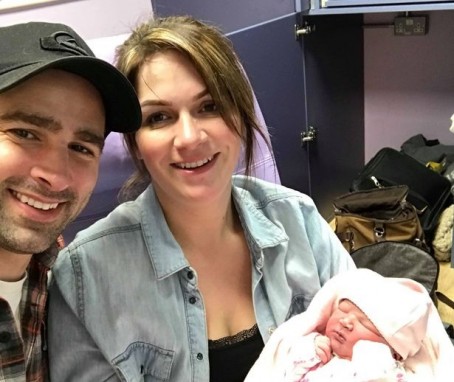 The couple with baby Harlow Star

He told Essex Live: “The name Harlow was my partner’s idea as we decided that she would name our daughter if we would ever be lucky enough to have one.

“We know the given meaning for the name ‘Harlow’ is freedom-loving, adventurous, adaptable, intellectual, easygoing, progressive and sensual, whereas ‘Star’ was chosen for close family and friends that are no longer with us.

“Especially with the loss of Emma’s mum three years ago and her father when she was younger, along with other close family members that could not share the new arrival with cuddles, it is a way for us to show that we love them and truly miss them.

“She is the perfect Christmas present and now we feel complete.”

Mr Davies, a retained fire fighter and kitchen installation manager, added: “I did have a comment on Christmas Day from my brother-in-law who asked me if she was conceived in Harlow, Essex, which was a funny comment as we had never heard of the place.

“I do know that Harlow is normally known to be a surname – and now a town with a local newspaper in Essex.”

A statement on Trinity Mirror’s Essex Live website, which serves as the online arm of the Star, reads: “Everyone at Essex Live, and especially the Harlow Star, would like to congratulate Brendan and Emma on the birth of their new baby.”