A regional daily confronted a councillor who ignored repeated requests for an interview after he moved 400 miles away and spoke to his new local newspaper instead.

Donald Adey has retained his seats on both Cambridge City Council and Cambridgeshire County Council despite moving to Fife, and has faced heavy criticism from former colleagues and opposition councillors as a reuslt.

A poll of Cambridge News readers found 97pc were in favour of him resigning, but Councillor Adey had ignored repeated requests from the Cambridge News and the BBC Local Democracy Reporting Service to speak about his decision to stay on and represent constituents from afar.

By contrast, when approached by Dundee-based daily The Courier, the former Liberal Democrat, who now sits as an independent, said he was “quite confident” he could cover his constituents’ needs by using “the internet, phone, Skype and such things”. 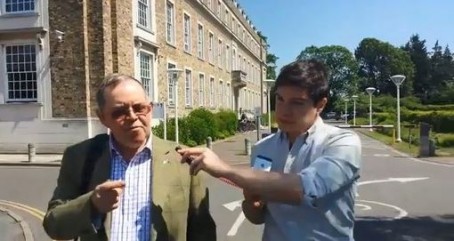 Cllr Adey, who represents the village of Trumpington, turned up at a full meeting of Cambridgeshire County Council last Tuesday, and was confronted by local democracy reporter Josh Thomas about why he had spoken to The Courier, but not the News.

In an exchange captured on video Cllr Adey claimed he had been “doorstepped” by a reporter, to which Josh responded: “I have been trying to get in touch with you through the normal ways, through calling you up on the mobile phone number that’s still on the council website here, and also sending an email and you’ve not responded to me yet.

“I’m a Trumpington resident myself, is this what residents can expect if they do try to get in touch with you in the normal way?”

Cllr Adey said he would respond to constituents’ emails, but Josh then questioned why he had not replied to local press enquiries.

The councillor responded: “Obviously you didn’t manage to get hold of me then but I am responding to you now and talking to you now.”

Josh told HTFP: “I don’t think he really wanted to speak to me, and he kept politely trying to say goodbye and bring the conversation to a close. Cllr Adey said living so far away would be no problem because people could contact him by email and he would respond. However, despite repeated attempts to call him, leaving phone messages as well as emails, Cllr Adey was impossible to reach until I collared him outside the meeting.

“I’m a Trumpington resident as well as a reporter. Cllr Adey needs to be accountable to the local press and the public – I felt very disappointed that he had been so difficult to get hold of. This isn’t what Trumpington residents should expect from a local councillor.

“It’s a rapidly changing area – with new people moving into brand-new housing developments. Soon, it will have to cope with increased traffic from employees at the nearby biomedical campus when AstraZeneca and the new Papworth hospital open their doors. Politically, it is changing too.

“In this month’s council elections, Labour took a seat not held by them there since 1945. Cllr Adey will need to prove he can keep on top of the shifting demographic, and abreast of issues on the ground.”