Council chiefs are set to discuss allegations made over six years by a weekly newspaper about irregularities in the running of community transport schemes partially funded by council cash.

Cambs Times editor John Elworthy first raised issues over allegations about the running of such schemes in October 2012, but only recently has the matter been looked into officially.

Since 2012 the Times has published articles on a regular basis covering every aspect of the funding arrangements, at one time being forced to fend off a legal challenge by the community transport operator.

Its campaign has concentrated on how licensing requirements were broken and one article used Freedom of Information responses to demonstrate that a Cambridgeshire County Council survey of community transport groups had, in the case of one organisation, been tampered with to a considerable extent to evidence more need than was actually the case. 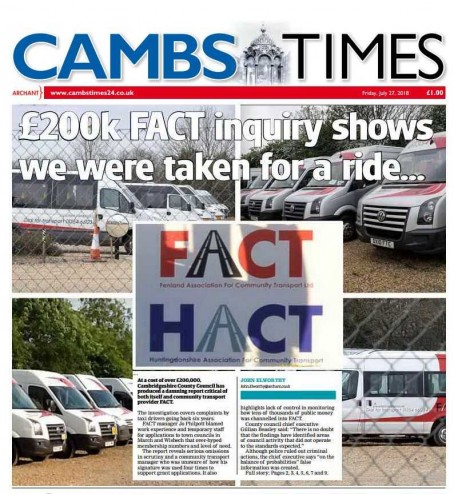 The groups operate as a not-for-profit organisation serving people in Cambridgeshire who have difficulties using conventional modes of transport.

According to the report the county council could be owed as much as £300,000, while it also found the authority did not follow their “own processes and procedures properly, or put in place robust checks” around grants and loans given out.

A special audit committee of the council has now been called this Tuesday to consider a response.

John has lodged 10 questions for consideration by the committee alongside 30 others by taxi industry officials, who have claimed commercial work being undertaken on the back of public and charitable grants to the community transport group constituted “unfair competition”.

Said John: “For the first time in a career that began in the late 60s as a junior reporter in Peterborough I shall be going to a council meeting to table questions as a concerned member of the public.”

The meeting has been switched from a committee room at Shire Hall, Cambridge, because of the numbers expected to attend – and council leader Steve Count told John on Friday he had agreed to allow the meeting to be streamed live.

John added: “That’s a good outcome. Twenty-four hours earlier his officials refused but clearly transparency is the new order of the day.”