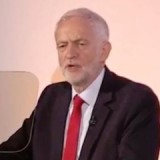 Jeremy Corbyn has touted giving charitable status to some local news providers and called for an expansion of the taxpayer-funded local democracy reporting scheme.

The Labour leader, left, has pledged further support for public interest journalism after warning that “vital oversight is being lost” because of the “decline” of local newspapers.

His remarks came as he delivered the Alternative MacTaggart Lecture at the Edinburgh TV Festival this morning.

Introducing his speech, Mr Corbyn said that one of his early jobs after leaving school was on the Newport and Market Drayton Advertiser, which he described as “hard work but huge fun”.

Going on to pledge his party’s support for “local, investigative and public interest journalism”, he said: “The best journalism takes on the powerful, in the corporate world as well as government, and helps create an informed public. That work costs money. We value it but somehow that doesn’t translate into proper funding and legal support.

“So, we should look at granting charitable status for some local, investigative and public interest journalism. That status would greatly help pioneering not-for-profit organisations, like the Bureau of Investigative Journalism, to fund their vital work through tax exemptions, grants and donations. Such a change would help support groundbreaking investigations, like the Bureau’s into how many homeless people are dying on our streets.

“I’d like to pay tribute to the Manchester Evening News journalists, who have also been trying to find out how many people are dying on Manchester’s streets with their powerful investigation ‘The deaths they don’t count’. And, I’d also like to single out the Hackney Gazette, which over five weeks, using Freedom of Information requests, undercover reporting and witness testimony, powerfully exposed the hidden homeless problem in one of London’s poorest boroughs, resulting in new commitments to action from the council.

“This type of journalism needs support and the government has a role in helping develop a business model to strengthen and underpin it. One solution to funding public interest media could be by tapping up the digital monopolies that profit from every search, share and like we make.”

Mr Corbyn went on to praise cooperative ownership models in the media, such as The Ferret and the West Highland Free Press.

He added: “This important part of the media, and its fantastic workforce, could also be supported by reform and expansion of an existing BBC scheme, which sees ring fenced funding for ‘local democracy reporters’ employed in local papers.

“Part of these funds could be made available to local, community and investigative news co-ops, with a mandate to use significant time and resources reporting on public institutions, public service providers, local government, outsourced contractors and regulated bodies.

“With the decline of local papers, this vital oversight is being lost. To root out corruption, improve services and empower citizens, we need a dogged local media with the time and money to work on stories.”