A weekly newspaper’s investigation has revealed children as young as 12 have been caught taking weapons to schools on its patch – but police have refused to say where.

The Dumbarton and Vale of Leven Reporter splashed on its exclusive findings, which came following a Freedom of Information request.

The Police Scotland response to the Reporter’s FoI revealed children between 12 and 14 had armed themselves with items including steak knives, a belt and a metal bar over the past four years.

However, the force refused to name the exact West Dunbartonshire schools where children were found armed, with a spokesman saying to do so could discourage people from reporting such incidents “for fear that the resulting information will be used to create a negative impression of that location”. 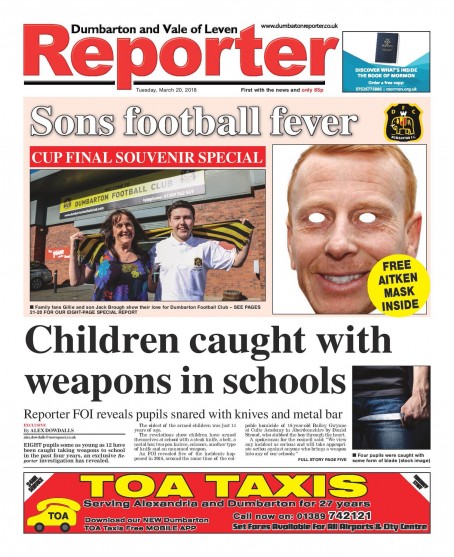 Reporter senior content editor Gillian Murphy told HTFP: “This splash shows there is still the appetite and aptitude in the local press to work hard for the stories that matter to our readers.

“As the newspaper for Dumbarton and the Vale we aim to keep our readers informed of everything that is happening locally – and that includes holding authorities to account.

“Using a Freedom of Information request in relation to weapons in schools is just one of the ways we can shine a light on what is happening behind the scenes in this community.

“Our team always goes the extra mile for our readers, and this is just one of the ways we are doing our job as a newspaper in service of the public.”

The spokesman said: “Keeping People Safe is at the heart of everything that we do but this is entirely reliant on building good relationships with the communities we serve and encouraging schools to make us aware of the issues in their area.

“As such, a higher number of incidents at one school cannot necessarily be taken to mean that the location is any way less safe than that of another school.

“It could simply mean that the management team and staff at one location are far more willing to engage with the police to attempt to deal with criminal behaviour and other matters of concern whereas at other schools, the same issues may be present but the staff are less inclined for whatever reason to contact the police.

“What we simply cannot afford to do is discourage people from reporting incidents to the police for fear that the resulting information will be used to create a negative impression of that location or a ‘league table’ of sorts offering up comparisons.”

The club, nicknamed the Sons, took on Inverness Caledonian Thistle in Saturday’s Scottish Challenge Cup final, and the Reporter has produced masks of manager Stevie Aitken for fans to wear.

Gillian said: “The achievement of Dumbarton Football Club in qualifying for the final of the Challenge Cup is something we, in the community, are immensely proud of.

“The masks of manager Stevie Aitken seemed like a fun way to engage with fans and show our support for the team in their cup bid. We ran the masks as an insert in each copy of the newspaper, ensuring everyone who wanted one could get their hands on it.”