Beer brewed in tribute to weekly’s bicentenary goes on sale

A special beer brewed to mark a weekly newspaper’s bicentenary has gone on sale.

The Westmorland Gazette has worked with the Hakwshead Brewery to produce pale ale ‘Wezzy Gezzy’ to mark the milestone.

The beer has been described by Hawkshead brewer Matt Clarke as “accessible” with fruity, tropical flavours.

Around 3,200 litres of the beer have been brewed, and it will be available at pubs across the Gazette’s patch. 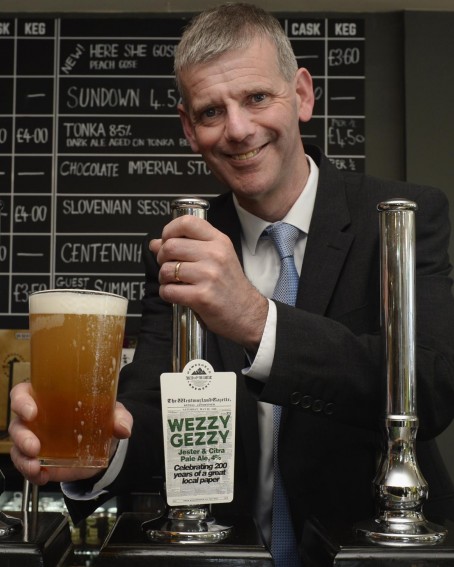 Editor Andrew Thomas, pictured, said: “It’s a real privilege to have worked alongside such a well-loved local business to create the Wezzy Gezzy beer.

“I think it’s fair to say that the whole Gazette team is looking forward to trying the result of Hawkshead Brewery’s effort.”

As reported on HTFP last week, the paper is also marking its 200th anniversary with an exhibition entitled ‘From Wordsworth to the Web: 200 years of The Westmorland Gazette’ – at the Museum of Lakeland Life and Industry at Kendal.

In addition a supplement focusing on the history of the Gazette will come out in May and a picture from the Gazette archives is being posted on its website every day this year.