Trinity Mirror has revealed the next phase of its rollout of a new newsroom model will see another 49 jobs go – bringing the total number of redundancies set to be made to almost 100.

The regional publisher has announced that its titles in the North-East, North-West, South-East and South-West of England, as well as Yorkshire, Lincolnshire and South Wales, will switch to the new ‘Live’ model whereby digital teams are made independent from the print teams.

Last month the company confirmed up to 49 jobs were set to go in the South-West, Midlands and Liverpool as it moves to the model, which was first adopted in Birmingham.

Under the latest changes, a new website called Cheshire Live will be launched to carry content from the Crewe Chronicle, Chester Chronicle and Macclesfield Express, while another new site, Staffordshire Live, will also be created. 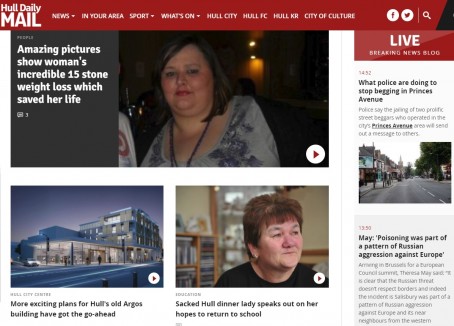 Websites set to be rebranded include:

Digital titles already on Live branding which will be moving to the new newsroom model are:

A company statement announcing the changes adds: “We are also continuing to refine our print production operations in some of these regions.

“Our proposals will result in up to 49 roles being at risk of redundancy and we have entered into consultation with those staff affected.”

The company says Wales Online and the Manchester Evening News will continue to retain their respective identities online, but with the City sections of Wales Online – Cardiff, Swansea and Newport – being rebranded as ‘Live’ channels.

Its online titles in the South-East of England will also be moved on to the ‘Live’ brand, with Get West London becoming West London Live and the Croydon Advertiser website becoming South London Live.

TM says the decision to launch Staffordshire Live has come following recent discussions with local businesses which “have convinced us there is a new audience to reach here in addition to the growing Staffordshire audiences using our Birmingham and Stoke sites.”

A spokesman said: “Our strategy is to ensure that content reaches an audience, regardless of which website brand that is under.

“Around Staffordshire, we have a number of sites in towns and cities which are very relevant to our readers. Since placing content from Lichfield and Tamworth in the Birmingham Live site, we have seen a net increase in the number of visitors from Staffordshire visiting content produced by us about Staffordshire.

“We will continue with this strategy as it works for readers. However, having spoken with people in Staffordshire, we have been convinced to try a Staffordshire wide website, which will pull together content from across our Midlands newsrooms and use it if those editing the site feel it is in the interest of people who prefer to come to a Staffordshire website.”

The previous rollout, which saw the Burton Mail website merged with that of the Derby Telegraph under the Derbyshire Live banner, led to protests from some staff members at the Mail, which is based in East Staffordshire.

Meanwhile the creation of Cheshire Live will mean the Crewe Chronicle, Chester Chronicle and Macclesfield Express newspapers will no longer have standalone websites, although the existing URLs will continue to direct readers to the relevant area of the new site.

A spokesman said:  “CheshireLive will serve the whole county with geographic, rather than subject-based, primary navigation. Readers will be able to go straight to their preferred town via the existing URLs, and we will build a new loyal audience to the Cheshire-wide brand. ”

In the South East and Cambridge, the company will also be rolling out changes to journalsts’ working weeks and pay structure with the aim of attracting more people into a career in journalism.

All journalists, excluding editors, will also move to a compressed full-time hours four-day working-week, to help staff achieve their potential and have an improved work and home balance.

Ceri Gould, editor-in-chief for the South East and Cambridge region, said: “We want the region to be both a centre of excellence for training new journalists and a region with an unrivalled reputation for the highest story-telling standards, online and in print.”

However the National Union of Journalists says it is “appalled” by what it called the “savage” level of cuts at the publisher, which recently announced that it would be rebranding itself as ‘Reach plc.’

General secretary Michelle Stanistreet said: “Further job cuts are terrible news for our members at Trinity Mirror and will heighten concerns over the company’s strategic direction.

“Will these “Live” brands mean anything to individual communities and towns proud of their distinct traditions, heritage and loyalties?

“These job losses will add extra work and pressure on to an already-overstretched staff.”