Hundreds of football fans who are usually unable to afford tickets are set to attend a match thanks to a regional daily columnist.

Karl Fuller, who writes about Ipswich Town FC for the East Anglian Daily Times and Ipswich Star, offered earlier this month to pay for two supporters who are struggling financially to attend the club’s next home game after being inspired by a Christmas shoebox appeal in which his 12-year-old twin daughters are participating.

After sharing his idea on Twitter, the initiative snowballed with dozens more Town supporters offering to match the offer and, in less than a week, donations reached the £2,400 mark.

Among those to donate was club captain Luke Chambers, who logged on to add £50 to the pot as well as rallying his team-mates to donate 20 of their complementary tickets for the game. 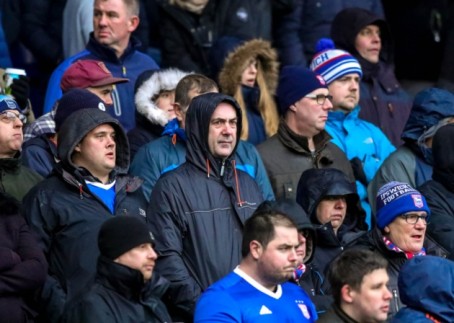 The initiative will help hundreds of Ipswich Town supporters

Tickets purchased as a result of the appeal will now be distributed to various charities and schools in the Suffolk area, who will give them out to supporters ahead of this Friday night’s match against West Bromwich Albion.

In a column about the appeal’s success, Karl wrote: “There was no plan in place for anything other than my sole gesture, and certainly there was little idea that I was to sew an idea that would very quickly grow into an unbelievable act of generosity by so many.

“Let me take you back a couple of weeks when I was heartened to see my twin girls enjoy putting together a Christmas shoebox each for less fortunate children in Romania. This touched me, particularly as I enjoy the odd occasion where I like to try and help others too.

I try not to pass a Big Issue seller for example without buying a magazine in the knowledge that they are running their own business and having to buy their magazines before selling them on for a small profit.

“By the end of last weekend, it was apparent that my ticket plan was going to grow into something extraordinary as fan after fan wanted to donate to also buy tickets for those less fortunate.

“I’ve so often thought that Ipswich Town fans are good people, and of course I would do. But this was proving that they weren’t good, they were brilliant.”

Karl added he “could not believe what was happening” once the appeal had begun.

He wrote: “Our total number of tickets bought is 420 which has been matched by the club. With a further 20 from the players, tickets from Grant Pringle and those fans who now continue to buy tickets online to forward onto me to distribute, we’ll have donated almost 1,000 tickets for the West Brom game.

“My very first game that planted the seed as an Ipswich Town fan came under the floodlights at Portman Road over 40 years ago. It would be lovely to think that another seed can be sewn for someone attending their first game under the lights too, made possible by so many of you.”