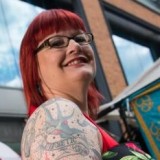 A weekly newspaper apologised after using a photograph of two people supporting a specific charity to accompany a story about a different good cause.

The Bexhill Observer used a photo of a woman and child in front of a Diabetes UK poster, wearing Diabetes UK t-shirts and holding information relating to Diabetes UK, in the piece about a meeting of the Bexhill Diabetes Support Group.

The story described the aims of the group, included its contact details, and noted that it was set up in 2011 as an “independent” group.

Caroline Cornford complained to the Independent Press Standards Organisation that the Observer had breached Clause 1 (Accuracy) because of its use of the accompanying photo, which she was pictured in with her daughter.

Ms Cornford, pictured, said its inclusion gave the misleading impression that she and her daughter were associated with the BDSG, and that BDSG was in turn associated with Diabetes UK.

The Observer said the picture in question was a library photo and admitted that more care should have been taken in its inclusion, saying it represented a significant inaccuracy.

The paper removed the online article, apologised to the complainant and offered to publish a correction.

This resolved the matter to her satisfaction and IPSO made no adjudication on whether there had been a breach of Code.