A weekly newspaper is preparing to mark the publication of its 500th issue as a rival title is set to shut.

It will publist its landmark edition this month, just as Trinity Mirror is preparing to close rival free weekly Bristol Observer.

The Week In founder Stephen Rodgers has marked its 500th issue by writing a book about his time working on the paper, which was initially set up as a paid-for weekly called the Keynsham & Saltford Times before being taken free 15 months into its life in a bid to widen its readership. 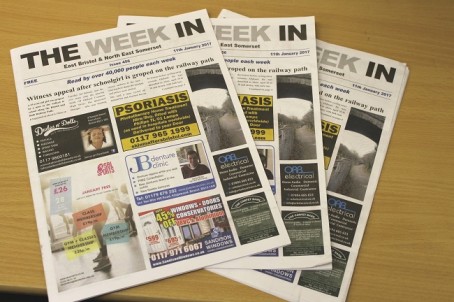 Stephen has a background in travel marketing and public relations, and was running his own business at the time he set the paper up.

His book ‘Week In week out – 10 years at a local newspaper’ is set to go on sale in the coming weeks.

Said Stephen: “It chronicles how the paper came about and features significant local events over the last decade as I saw them. It also includes my personal views of press standards, regulation and the future for printed media.”

The paper’s revenue comes solely from advertising and Stephen says turnover for 2017 is close to £250,000.

He added: “Because I had an existing business, I was fortunate in being able to limit the start-up costs but even now the permanent staff numbers four and we all share a tiny office. Two sell adverts, two of us write and I do the admin. We buy in design services and the delivery team is mainly retired guys who enjoy getting out and about with the papers each Wednesday.

“While adverts bring in the revenue, the editorial content is key to the growing success and the reason so many copies are picked up in the first place. It is something of a virtuous circle in that people don’t simply pick up The Week In because it’s there, they actively seek it out each Wednesday and woe betide us if the lorry is ever late with the delivery.

“The Week In has gained a reputation for scrutiny and holding to account over the years and has been behind local campaigns over issues like housing development or car parking. It has retained credibility with readers and remained independent in its reporting.

“Much of this is down to Becky Feather, who joined me in 2013. Her background in journalism has included local publications like the Bath Chronicle and was already a familiar face in local council chambers.”

The book is available to order now on Amazon.