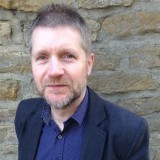 Andy Plaice’s book Arts Reviewing: A Practical Guide offers advice on the subject, along with a debate on challenges facing the craft such as the internet.

Andy, left, edited the Melton Times from 1992 to 2005 and then spent a year as managing editor of the Rutland Times, having began his career on the Grantham Journal in 1988.

He is now a senior lecturer in journalism at De Montfort University, in Leicester.

Said Andy: “The book came about as a solution for students – an up-to-date text that tackled these subjects just didn’t seem to exist. At De Montfort University, as well as teaching general news and features, I specialise in arts and entertainment journalism.

“Leading academic publisher Routledge was very keen to pursue it. But its beginnings can be traced to my late teens and early 20s, firstly as a drama student because of a life-long love of theatre and secondly as a junior reporter.

“Touring shows, amateur dramatics and panto starring someone from Emmerdale all needed covering, and nobody else particularly wanted to do it. The quality ranged from Ian McKellen in Richard III to shockingly bad church hall plays where they served weak orange squash in the interval.”

Andy added: “Chapters explore what a critic actually does, how she prepares and what his responsibilities are. Then of course how to write one and what the impact of that criticism might be – who benefits, who doesn’t, and does it actually matter anyway?”

“Other chapters focus on how free and instant online journalism has changed the playing field of criticism forever with case studies including Harry Potter and the Cursed Child in the West End along with the notion of North American embedded critics – critics and journalists paid by orchestras, art galleries and theatres.”

The book is available to buy here.