Weekly editor steps down after eight years in charge 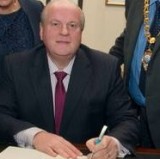 A weekly newspaper editor was honoured by civic leaders at a ceremony on his patch after stepping down from his role after eight years.

Jim Flanagan, left, is leaving his role as editor of the Ballymena Guardian and will be succeeded at the Alpha Newspapers-owned Guardian by Des Blackadder.

Prior to editing the Guardian, he spent 30 years with the Belfast Telegraph and its associated titles.

Jim was the Bel Tel’s deputy editor for 10 years as well as managing editor of its weekly Community Telegraph series, later going on to edit sister title Sunday Life between 2005 and 2009.

Said Jim: “The job has taken me all over the world, but now I want to move on to the next stage of my life.”

Mayor of Mid and East Antrim Paul Reid held a reception in his parlour to mark Jim’s contribution to Ballymena.

Members of the Jim’s family, current and former colleagues, and North Antrim MP Ian Paisley Jr were among those present.

Jim had broken the story of the retirement of Mr Paisley Jr’s father, Democratic Unionist Party founder Ian Paisley Sr, and the MP presented him with a walking stick which had belonged to his dad.

Paying tribute to him, Mr Reid said: “Jim Flanagan is rightly regarded as one of Northern Ireland’s finest journalists and newspaper editors. It was a huge coup for his employers to secure the services of such a talented, diligent and capable newspaper man as Jim.

“The Ballymena Guardian is renowned for the quality of its local journalism and Jim has not only safeguarded that reputation, but successfully built on it.

“A strong local newspaper is one at the beating heart of a community, with a finger firmly on the pulse of local issues and matters that impact its residents. Its role and that of its editor and journalists is to inform, educate, enlighten and entertain its readership.”

He added: “Jim is not retiring, simply changing direction. I’m glad to hear he intends to keep his hand in and we will no doubt come across him on our televisions and in our newspapers in the months and years ahead.”