Weekly back in town centre street after two years away

A weekly newspaper has returned to the street where it was previously based after two years in a different office.

The St Helens Star has moved into a town centre business suite on the sixth floor of eight-storey building Century House, on Hardshaw Street, St Helens.

The Star was previously based two minutes away on Parade Street, having moved there from a different Hardshaw Street building in 2015.

Plans were submitted in March to turn the Star’s old Hardshaw Street headquarters into a bar, restaurant and flats. 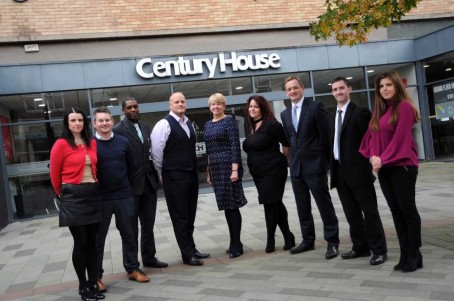 Star staff outside their new office

Editor Andrew Kilmurray says the new base will allow the paper to “work with businesses to develop effective print and digital platforms to promote their key messages”.

Andrew said: “The new office is an excellent, modern working space that puts us right at the centre of the action – and already we are reaping the rewards of being closer to the stories when they break and nearer to our readers and advertisers.

“We have been transforming our newsroom so that we are set up to offer a website with an up-to-the-minute news service. Our readers have responded to this and we now have one of the fastest growing digital audiences in the North West.

“I’m confident the new office will take us to the next level as we seek to reach even more readers while, under the direction of our new advertising manager Clare Fitzgerald, the multimedia sales team will work with businesses to provide them with the best, modern solutions to reach their customers.”