Campaigning journalists from across the regional press have scored a victory after the Government announced planned tougher sentences for dangerous drivers.

Killer drivers now face life behind bars under new proposals, which have been revealed following a public consultation.

Last October, York daily The Press launched its ‘Road to Justice’ campaign urging Ministers to re-write sentencing guidelines after a driver on its patch who left a moped rider close to death was given just 32 months in prison for his crime.

The following month, Johnston Press launched its group-wide ‘Drive for Justice’ bid after its central investigations team compiled a report revealing the truth behind Britain’s deadly road crimes and the scandal of lenient sentencing in the UK. 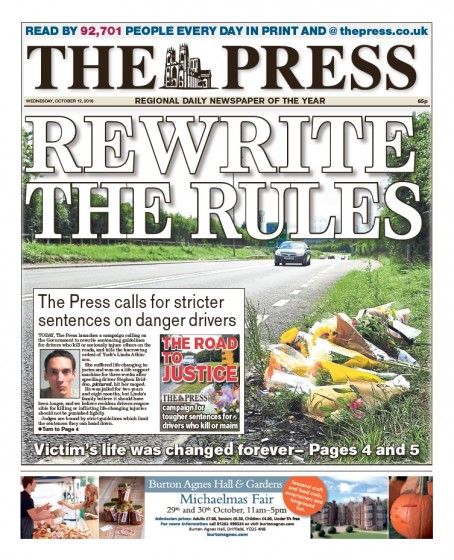 Senior reporter Alex Ross, who led the campaign by The Press, said: “The success of our campaign was excellent news for the North Yorkshire families who did not get justice when their relatives were killed or seriously injured by a dangerous driver.

“Those I have spoken to since the Government announced the changes are delighted and thrilled others will not have to suffer like they did when a short sentence was handed down.

“This campaign relied heavily on the people who have experienced terrible tragedies opening up to a reporter about life changing injuries or losing a loved one.

“Without them showing the courage and bravery to speak out about what they feel is right, these changes in the law would not have been possible.”

The Government’s consultation sought views on whether current maximum penalties available to the courts should be increased and received more than 1,000 replies in just three days when launched in December last year – rising to more than 9,000 when it closed in February.

Johnston Press editor-in-chief Jeremy Clifford said: “Nothing can ever undo the pain felt by the families whose lives have been ruined by dangerous killer drivers. But these changes will at last bring a measure of justice to this situation.

“This shows how trusted local and national media like Johnston Press can truly influence issues which really matter to the real people who are our readers.”