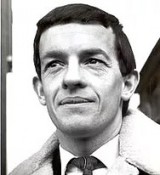 A reporter who described himself as “one of journalism’s foot soldiers” has died aged 81.

Cliff Mogg, left, worked on the Surrey and Hants Star and Chertsey’s Surrey Herald, among other evening and weekly newspapers in Surrey and Hampshire.

He even wrote a book, called ‘Don’t Quote Me’, taking a light-hearted look at his 50 years in journalism.

It featured tales of how he found himself in a race with former Olympic runner Chris Chataway, got a scoop with John Lennon’s psychedelic Rolls-Royce and almost touched noses with pianist Russ Conway through a slatted wooden fence.

Alan Franklin, who edited the Aldershot-based Star for 21 years and worked with Cliff for eight years, described him as “one of the great local journalists.”

He said: “Although there was just a handful of us in our editorial eyrie above a Nepalese restaurant, we had the time of our lives, putting out a local tabloid so popular that a long line of readers queued on the stairs and up the road for it when the bundles of papers arrived every Thursday.

“Cliff wanted to be a reporter from the age of 12 and did the round of weeklies and evenings in Surrey and Hampshire, from the days of carbon paper to keyboards.

“Cliff spent half a century as, in his words, ‘one of journalism’s foot soldiers, covering most stories which were thrown at me, from murders and political scandals to show-business interviews’.

“One of the best days of my 21 years editing the Star was when Cliff joined our team, and we started Mondays, not with any worries, but with a happy chat about the weekend’s football results.

“We could be so relaxed because Cliff, John Walton and my wife Pat, were such good journalists that they could do in ten minutes what less talented folk would take half a morning over.”

He added: “At Cliff’s recent funeral in Basingstoke I encouraged Trevor, one of his four sons, to make sure his dad’s memorable, witty and insightful series of newsroom stories was made available to today’s journalists, to show them how we did it.

“Trevor has done journalism a great service and Don’t Quote Me is now available in various formats.”

The book can be bought here.