An international sports reporter says she believes there are more job opportunities in the sector than when she began her career 15 years ago.

Faye Carruthers, who regularly reports for Sky Sports and Channel 5, believes the number of sports journalism jobs are increasing because of the rise of different media platforms.

Faye spoke to journalism students at the University of Northampton about her work, which also sees her report for Premier League Productions – the company which provides all Premier League coverage outside the UK.

She also discussed the state of the journalism industry while at the university. 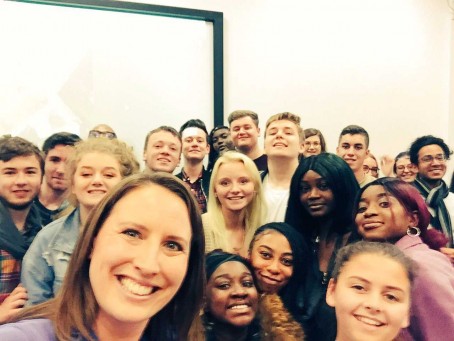 Faye, in the foreground, with University of Northampton journalism students

Said Faye: “When I graduated 15-odd years ago we were told that journalism jobs were drying up. But that hasn’t been the case, because a rise of different media platforms means there are actually more opportunities.

“You only have to look at how sports coverage has taken off on social media to see how many opportunities there are – and with Google and Amazon looking to break into the market, there will be many more to come.”

One of the students in the department has also recently undertaken work experience with the Press Association in Manchester.

She has produced a video discussing her time with PA, which can be viewed here.

Said Alice: “I wouldn’t have had this opportunity if it wasn’t for the University of Northampton. My lecturers had the contacts I needed to get the work experience, and they gave me the skills I need to complete it successfully.”