Sister dailies deliver 11,000 signature petition in bid to save 350 jobs

Two sister dailies have delivered an 11,000 signature-strong petition aimed at saving 350 jobs in the region they serve.

As previously reported on HTFP, the Norwich Evening News and Eastern Daily Press are campaigning against plans by drinks giant Britvic to close its manufacturing plant in Norwich, where Unilever also produces Colman’s Mustard.

The proposal has put 350 jobs at risk and threatens to end a 200-year association between Colman’s and Norwich.

Despite travelling from Norwich to Hemel Hempstead, and then Leatherhead, on Tuesday to deliver the petition to the UK offices of Britvic and Unilever respectively, only press officers would meet with the newspapers’ representatives. 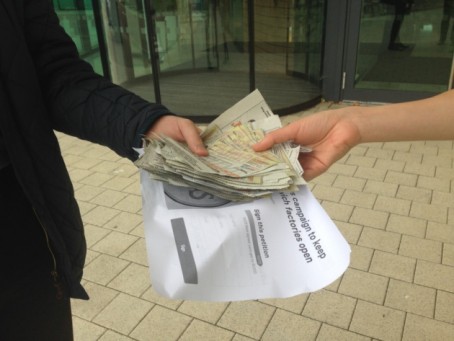 David Powles, editor-in-chief of both titles, said: “It is a shame that no senior executives from Britvic or Unilever could meet our reporters to receive the petition which thousands of people have taken the time to sign.

“There is a huge amount of support within the city and across the county to keep both factories open. Not only are they an important part of Norfolk’s heritage, they also employ hundreds of people.

“We can only hope that those who will ultimately decide the future of both sites will read through some of the comments left on the petition to understand how much of an impact these closures will have on the city.”

Britvic and Unilever said the petition coupons, which were signed and returned by readers, would be looked at.