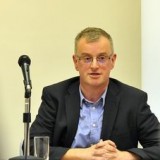 A regional daily editor is set to be among the speakers at a European journalism conference being held on his patch.

Rob Irvine, editor-in-chief of the Manchester Evening News, will discuss how his staff reported on the Manchester Arena terror attack during a session at the News Impact Summit.

The conference, organised by the Google News Lab and the European Journalism Centre, will be held on Thursday.

More than 200 editors, journalists and academics from around Europe are expected to attend at Manchester Town Hall.

Rob is on a panel, along with Greater Manchester Police and the BBC, taking questions about lessons learned from the aftermath of the attack.

The Times, New York University and community news projects in the UK will also participate in the event.

Mattia Peretti, of the European Journalism Centre, said: “The News Impact Series wants to promote innovation in journalism across Europe and has visited 15 different countries since 2014.

“After organising two Summits in London, we have decided this year to visit Manchester as the city has positioned itself at the forefront of digital innovation in Europe and seemed to be for this reason a perfect fit for the News Impact Series.

“Hamburg and Milan are other examples of non-capital cities that we have visited and the more Summits we organise, the more new locations we hope to explore all over the continent.”

Anyone interested in attending must apply for free tickets by Monday, and can do so here.