The chairman of the world’s oldest press club says the challenges facing journalism in the UK are more serious than elsewhere in Europe.

Birmingham Press Club chairman Llewela Bailey has spoken out on the issues of declining newspaper sales and the number of journalism job losses after attending the European Press Clubs Federation’s annual general assembly.

At the assembly, held in Warsaw, The club was admitted to the organisation, which represents journalists’ interests across the continent.

Both Llewela and Press club director Adrian Kibbler made a presentation to delegates in the Polish capital prior to its admission. 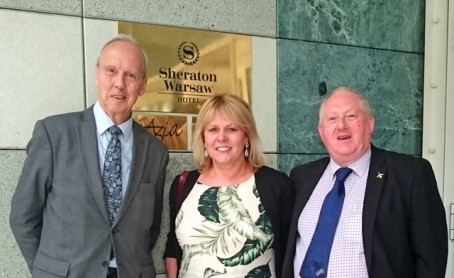 The federation offers joint collaboration on issues of importance relating to legislation and press freedom, information sharing and enhancement of journalistic credentials.

Said Llewela: “It was a great opportunity to meet our European counterparts, exchange experiences and to bring them up to speed about our own Club, the oldest one of its kind in the world.”

“There was an interesting discussion about the challenges facing journalism and the impression was that whilst the decline in paid-for sales and job losses in journalism are factors in other countries the situation in the UK is more serious than in other parts of Europe.”

Adrian added: “A common issue facing clubs is the emergence of a ‘blogging community’ and the challenging question is ‘are bloggers journalists?’ The answer – some are some are not, but there was a clear view that clubs have a role in upholding journalistic standards.

“Whilst most clubs have journalists and non-journalists as members the view of other clubs was that press and the promotion of journalism should be at the key to the work of member clubs.”