OAP back home for Christmas after weekly’s investigation

A pensioner has won back her home in time for Christmas after a weekly newspaper’s investigations into a fraud probe involving a dead councillor.

The Coventry Observer first revealed two years ago that former Coventry City Council deputy leader Phil Townshend, who died in October 2015, had faced police and legal investigations over allegations he abused the woman’s trust when acquiring her home in 2011.

After Cllr Townshend’s death, it also transpired he was bankrupt.

Since then, legal wrangling has been ongoing over the ownership of the home, where the elderly woman continued to live despite the transfer of ownership to Mr Townshend in 2011, which she insists she knew nothing about. 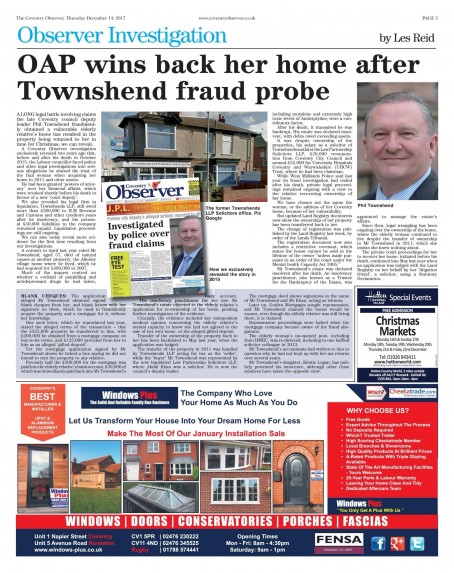 But updated Land Registry documents now show the ownership of her property has been transferred back to her.

The paper has now further revealed the application to the Land Registry alleged Mr Townshend obtained signed blank cheques from her, and blank letters with her signature on them, which he used to fraudulently acquire the property and a mortgage for it without her knowledge.

The Observer has chosen not the name the woman, a relative of Cllr Townshend, or the address of her Coventry home, because of her vulnerability.

Observer editor Les Reid, who conducted the investigations, said: “This has been a highly sensitive, difficult and complex investigation over two years.

“We have come under heavy pressure from certain quarters and faced legal restrictions. But it has been overwhelmingly in the public interest to pursue the story, while others have ignored it or sought to discredit it.

“It’s right that more evidence is now in the public domain, contained for the first time in our latest detailed investigative article.

“Some serious questions concerning the conduct of the authorities and certain public figures remain.”