The Eastleigh Times hit the streets in the Hampshire town today, following from the recent launch of the Oldham Times and the revival of the Darlington Despatch.

The new title replaces the Eastleigh News Extra and will be distributed door-to-door in parts of the borough and on sale for 40p elsewhere.

It will be edited by Southert Daily Echo editor Gordon Sutter and produced out of the Echo’s Southampton office. 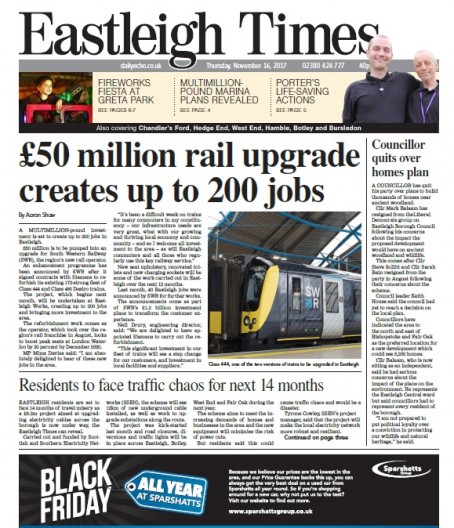 Said Gordon:  “I would like to welcome our readers and advertisers to the Eastleigh Times.

“I want the Eastleigh Times to be a true community newspaper, reflecting life and the issues that affect the diverse communities across the borough. “So far our new publication appears to have been well received by the people of town.”

Newsquest Hampshire commercial director Laura Bielinski added: “We are delighted to bring our readers and advertisers a new, bigger and better publication dedicated to Eastleigh.

“The initial response from our clients has been fantastic and we know the Eastleigh Times will continue to be a success with their support.”

Eastleigh Times editorial, sales, and marketing staff were joined by council staff and business bosses at the official launch of the weekly newspaper at the town’s Swan Shopping Centre.

Its patch will include the upmarket Hampshire communities of Chandler’s Ford, Hedge End and Hamble.

In the first edition the newspaper broke the exclusive story of a £50 million investment in the railway works in the heart of the town creating 200 new jobs.