Columnist reveals true identity as she bows out after 40 years

A journalist has written the last of what is thought to be one of the nation’s longest-running columns – and signed off by revealing her true identity.

Marie Boullemier wrote her first column under the pen name ‘Pandora’s Box’ for the Northants Post in 1977, but has now decided to call it a day after turning 70 earlier this year.

Marie only revealed her identity in the final column, which appeared on Thursday in the Northampton Chronicle & Echo, the newspaper she has written for since the 1990s.

Of her decision to retire from writing the column, which tackled a variety of issues including police incompetence and council inefficiency over the years, Marie said it was “time to hand over to the youngsters”. 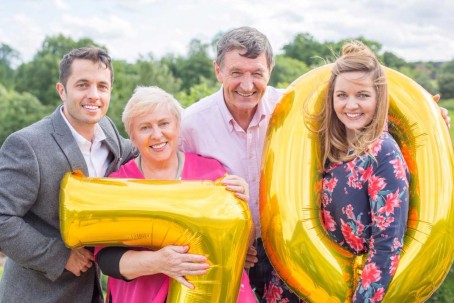 Marie Boullemier at her 70th birthday this year. Pictured with son Richard, a radio journalist in Dubai, husband Tony, and daughter Kerry, who works in the Department of Health Press Office. Picture: Ben Compton Photography

She added: “In many ways I’m sad to be calling it a day. I’ve never run out of targets to attack and there are now more than ever.

“I’m passing on the baton and I hope the journalists who pick it up will hold to account all those who deserve it.”

Marie started in newspapers aged 19, as a secretary to Peter Stephens, editor of Newcastle daily The Journal, where she met reporter Tony, her future husband.

She got her break as a reporter at the Consett Guardian, in North West Durham, then moved on to the Kilburn Times, Herts Advertiser and Evening Echo at Hemel Hempstead, as well as working reporting shifts at The Sun.

In 1975, she and Tony, then chief subbing at the Daily Express, founded the Northants Post with him as editor and her as news editor.

Tony said: “She was a terrific news editor and reporter. She could get stories from anyone, anywhere. But after six months we were going bust and Marie switched to running classified advertising. She kept her writing hand in by starting Pandora’s Box in 1977 and it was always one of the Post’s most popular features.”

The Post recovered and hit a group circulation of 400,000 a week before the Boullemiers and their partners sold out in 1988 to Thomson Regional Newspapers.

They left the company a year later but Marie carried on writing for it when it changed its name to the Herald & Post, until she switched to the Chronicle & Echo.