Journalist who was music critic for rival dailies dies aged 85 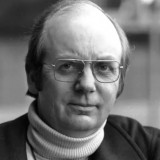 A writer who served as music critic for two rival daily newspapers has died aged 85.

Tributes have been paid to Conrad Wilson, left, who held the post with The Scotsman for almost 30 years, and then continued in the same role on a freelance basis for Glasgow daily The Herald.

Conrad, who died last month, trained as a journalist with the now-defunct Edinburgh Dispatch, and later worked in Amsterdam as programme editor for Philips Records.

After a spell as sub-editor in the BBC’s London newsroom, a conversation with The Scotsman’s London Editor Eric Mackay resulted in his appointment as the paper’s cultural correspondent, based in the capital.

Conrad returned to Edinburgh to take the music critic role, which he held from 1963 to 1991.

He later said: “To be music critic of The Scotsman in its heyday was the job I had envisaged since boyhood.”

In an obituary for The Scotsman, Kenneth Walton wrote: “His vast musical knowledge and open outlook allowed Wilson to place all that within the context of the wider musical world. He delighted in the fact The Scotsman provided him with a budget each year for ‘international travel’.

“As one of the chief chroniclers of the era – the other was his west coast sparring partner at the Glasgow Herald, Malcolm Rayment, followed by the rampantly populist Michael Tumelty – Wilson’s authoritative journalism remains a powerful instrument of record.”

Kenneth added: “After retiring from The Scotsman, he continued as a freelance critic for the Herald. He remained a compulsive writer, and even when health problems made it difficult for him to get out, he created his own blog, in which a series of personal reminiscences hinted at an evolving autobiography.

“Alas, it never materialised. His website photo shows a hugely contented man with an eccentric floppy hat, a knowing smile and kind, faintly mischievous eyes. For me, that was the real Conrad.”

Conrad is survived by a son and daughter from his first marriage to Ruth, and by his second wife Sue and their three daughters.