A journalist says he was unfazed after eating a burger topped with insects for a feature.

Darren Burke, digital journalist at the Doncaster Free Press and Sheffield daily The Star, tucked into dead locusts, crickets, mealworms and buffalo worms after being challenged to do so by a restaurant.

Darren volunteered after Sheffield’s 8oz Burger Co offered the six-legged treated to journalists, and returned a “delicious” verdict back to readers. 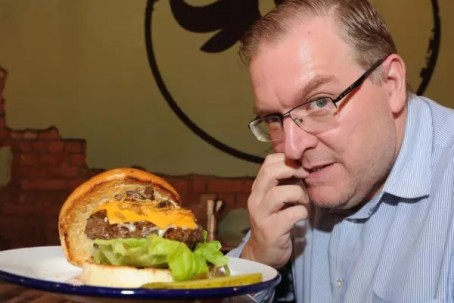 Darren Burke before the challenge

Said Darren: “You don’t realise you are eating the bugs unless you pick them out and eat them separately.

“They are crunchy and a bit chewy, and sort of taste a bit nutty, a bit woody, a bit leafy.

“But after a while, the bugs just blend in with the taste of the burger – which was pretty delicious and juicy.”

He told HTFP: “I’ve done eating challenges before for the paper and it didn’t really faze me.”