Journalist cremated with copies of old newspapers after death aged 85 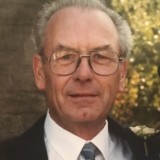 A former regional journalist who died aged 85 has been cremated with copies of the newspapers he used to work for.

Tributes have been paid to Trevor Atkins, left, who covered stories including the Yorkshire Ripper murders and the Bradford City stadium fire during his 41 years in journalism.

Trevor worked for the Keighley News, Bradford Telegraph & Argus and Yorkshire Post in a career in which he also covered the crimes of ‘Black Panther’ murderer Donald Neilson.

He also served as president of both Keighley and Bradford branches of the National Union of Journalists.

Trevor died at Airedale General Hospital, in Keighley, on 10 November, and his funeral was held in the town on 23 November.

He was cremated with copies of the News, T&A and Post in his coffin.

Hiss son Graham told the News: “He was very hard working and caring. He always put other people first and he really did not have a bad word to say about anyone. He wouldn’t judge people.”

Born in Keighley, Trevor began his career on the News after completing National Service as a Royal Air Force clerical worker in 1949.

He helped launch a new weekly paper in Shipley in 1963, and then went on to work for the Telegraph & Argus at its Bingley office.

Trevor later joined the Yorkshire Post before retiring in 1990.

He was a friend of the Settle to Carlisle railway line, and survived a 1995 crash on the railway when a landslide caused the train he was travelling on to derail.

It claimed the life of a conductor and caused many injuries to passenger, with Trevor ending up in hospital with broken ribs.

He met his wife Barbara in 1949, when she was working at a business over the road from the News’s office, and they married in 1956.

As well as Barbara and Graham, he is survived by son Stephen and granddaughter Amy.