The decision to take two sister dailies weekly is “the right thing to do” according to a deputy editor-turned-journalism lecturer in the county they serve.

Paul Wiltshire, of the University of Gloucestershire, believes the switch, which came into effect last week, will give the Gloucestershire Echo and The Citizen, Gloucester, a “fighting chance” in print by giving editorial teams the time for “more analytical pieces”.

In a piece on his personal blog about the change, Paul also predicted that the number of daily regional titles which survive into the 2020s will be “limited indeed”.

Paul served as deputy editor of the Bath Chronicle when it made the switch from daily to weekly in 2007. 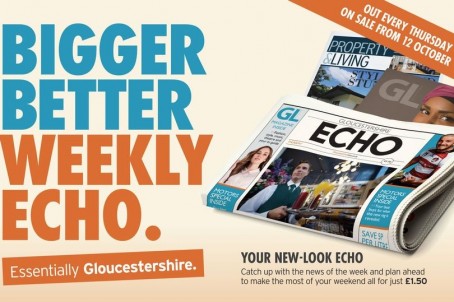 On his blog, he wrote of that decision: “It was the right thing to do – and it was the right thing for the papers on my doorstep in Gloucestershire to do this week. Our industry’s fragile hold on its customers means that the number of daily regional titles which survive into the 2020s will be limited indeed.

“Time poverty, age profile and societal changes all conspire against six-day-a-week consumption of all printed products, but especially against regional ones. My children are 19 and 23, and have never bought a newspaper in their lives. I wonder if they ever will.

As part of the changes, Trinity Mirror has launched a Gloucestershire edition of the Western Daily Press will be launched to cater for readers in the county who still want a daily print product.

But Paul warned “regional print as we know it will not last forever”.

He added: “Offering a weekly rather than daily product gives titles a bit more of a fighting chance. It ought to buy editorial teams the time for more analytical pieces, for writing that really sings, and for a decent sense of proportion that genuinely sees the wood for the trees.

“It would be simplistic and patronising to characterise this as nutritious, home-cooked fare in contrast to the e-number-packed fast food that keeps the Chartbeat {the system used by TM to monitor online performance] wolf from the door. But it is the sort of coverage that stands the greatest chance of building loyalty, of strengthening those gossamer-thin bonds with potential readers.

“I’m glad that my friends at the Echo and Citizen spent the first two days of their new weekly regime getting to know their readers at mini-roadshows.

“Because, as I have said before, we fear what we don’t know. If we can build both trust and loyalty, we can start to take our readers to new places, to challenge them to think differently and to consider fresh ideas.”