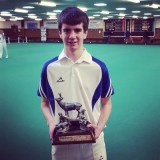 Darren Weir, left, who studies at the University of the West of Scotland, reached the final of the Gents Scottish Masters before losing out to more experienced rival Graeme Donaldson.

The tie, at Perth’s Dewars Centre on Friday, was deadlocked at one-set-all before Darren’s opponent secured the third set on a tie-break.

Darren, 18, won his way to the final after winning six games in the weeks running up to it.

Of his experience, he said: “We played on the portable rink which they use on the tour and were in front of the TV cameras. The game was shown live on YouTube with highlights on the BBC but that didn’t faze me.

“I felt I played well but he came up with the right shots at the right time. It was a good achievement to reach the final and this will give me confidence in the weeks ahead.”

Darren has previously represented Scotland in the 2015 Commonwealth Youth Games in Samoa.

The following year he won the Scottish Under-18 Singles title.