A former regional photographer has fulfilled a three decade-long dream of playing a pantomime dame.

Len Copland, who was chief photographer at the Western Gazette, was made into an ugly sister ahead of a production of Cinderella at Yeovil’s Octagon Theatre.

The transformation was undertaken by Matt Daines and Ian Smith, who play the ugly sisters Beatrice and Eugenie in the production.

Lipstick, rouge and eye paint was applied to Len, as well as a costume and green wig. 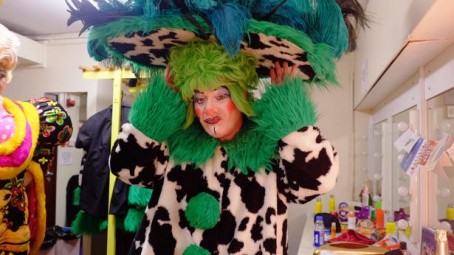 Len said: “I have wanted to do this for three decades and now my dream has been fulfilled.

“But how they remember all those costume changes, the lyrics, the jokes, and not fluff their lines I will never know. More importantly it’s three days later and I’m still scrubbing the guy liner off.”

Mr Daines said: “It’s all about the character – the costumes and the wigs come second.

“It’s the face first, because that’s obviously who we are and how we want to be. It’s not enhanced by any colours or anything to do with our costumes – with that, we just throw it all on, see what happens and hope for the best.”

Mr Smith added: “The trick with being a pantomime dame is: you are playing a character – you are not a woman. We like to be the blokes in the frocks.”