A weekly newspaper has paid tribute to a footballer killed in action in the First World War 100 years ago by devoting its front page to his memory.

Former Prime Minister Gordon Brown was among those paying tribute to former Raith Rovers captain George McKay as the Fife Free Press marked the centenary of his death.

Rovers supporter Mr Brown wrote a special feature on McLay’s life and times for the Press this week, and was also at the club’s annual Hall of Fame show for former players on Monday.

The show was co-founded by the FFP six years ago, with figures from the sporting world such as Harry Redknapp, Jeff Stelling, Paul Merson, and, this year Chris Kamara and Ray Parlour, having attended. 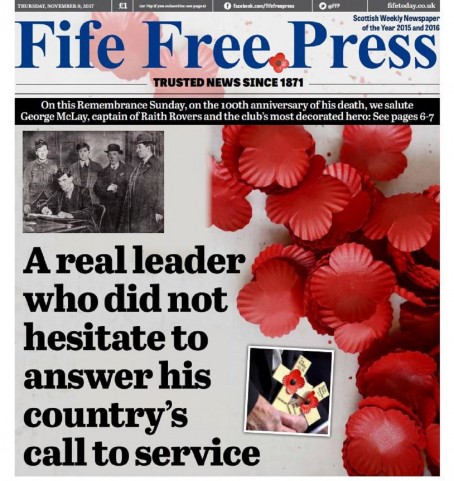 The Johnston Press-owned paper splashed on its tribute to McLay yesterday, ahead of Remembrance Sunday.

Editor Allan Crowe told HTFP: “Three Raith players were killed in WW1 while serving with the McCrae’s Battalion which was created by Provost McCrae of Edinburgh and saw footballers from a number of Scottish teams enlist. On the 100th anniversaries of their deaths we inducted them into the Hall of Fame – two last year, and, George McLay this year. He was the club’s most decorated war hero.

“Gordon Brown, former Prime Minister, wrote a special feature on McLay’s life and times for the Press this week, and he was also at our event on Monday night to formally induct him into the Hall of Fame – we were able to track down relatives to join us on stage.

“That then led to the front page which focussed on McLay, who survived the Battles of the Somme and Passchendaele before being shot many times at Ypres. He was decorated with the Military Medal for his leadership and bravery.

“The feature, and his story chimed perfectly with Remembrance Sunday as well as our own event, and came together for a front page which was put together by Simon Bebbington at our design hub.”