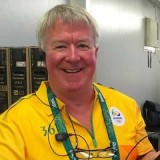 A former editor has been appointed as station manager of a local TV channel.

Robert Lloyd, who edited both the Carmarthen Journal and Llanelli Star, has taken up the role at Bay TV Swansea, where he will also hold the head of news title.

Robert, left, has more than 40 years of experience in media and is also a former deputy editor of Swansea daily the South Wales Evening Post, .

He edited the Journal and Star jointly between 2005 and 2008, before stepping down to launch his own media consultancy.

“I will be working hard to build further partnerships in the community and extending Bay TV Swansea’s reach into the Swansea Bay area.”

Peter Townsend, chairman of Bay TV (Swansea) Ltd, said: “We are delighted to welcome Robert Lloyd to the team at Bay TV Swansea.

“He is a well-known figure throughout the community and brings a wealth of experience to the team.”