Football fans have criticised a regional daily for running a competition allowing readers to win tickets for a club not based on its patch.

Fans of Shrewsbury Town and Telford United took to social media after the Shropshire Star announced the contest offering entrants the chance to win tickets to every Aston Villa home game for the rest of the 2017/18 season.

Villa are based in Birmingham, but the club’s exploits are covered in the Star’s sports pages on a regular basis.

However, dozens took to Twitter to protest about the competition – with some even calling for a boycott of the newspaper. 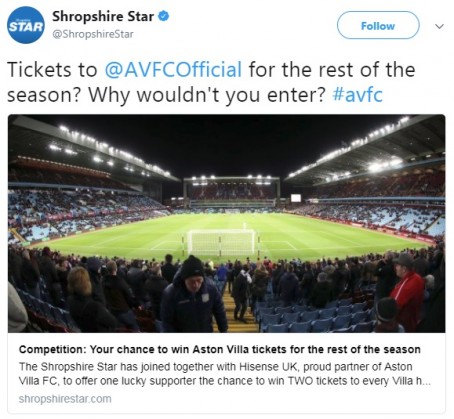 The competition was promoted on the Star’s official Twitter account with the caption: “Tickets to [Aston Villa] for the rest of the season? Why wouldn’t you enter?”

Among those to respond on Twitter was Neil Handley, who posted: “You are the ‘Shropshire’ Star – not the Birmingham Mail. You should be promoting Shropshire clubs.”

Shrewsbury Town fan Aleix Gwilliam added: “Absolute disgrace that you run this. Why not show support for your local team who, if you hadn’t noticed, are doing quite well this season.” 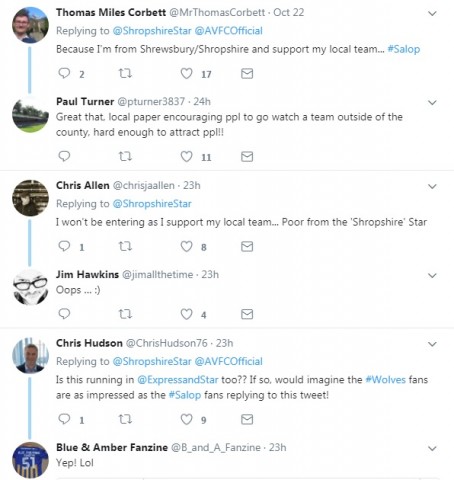 Some of the criticism levelled at the Star by fans

And a user posting under the name ‘kitcub’ said: “What an absolute shambles. Should be ashamed of yourselves normally but especially this season with [Shrewsbury Town] flying as they are. Boycott.”

A spokesman for Star owner the Midland News Association told HTFP: “The Shropshire Star continues to focus primarily on the clubs in the county and has reported on the successful League One campaign to date by Shrewsbury Town at every step.

“The Star retains strong links with all the county clubs and has regularly run competitions for their fans. It has provided readers with editorial coverage on Aston Villa for many years so this competition provides Villa fans living in the county with an opportunity, if they wish to enter.”