A new regional “alternative tabloid” has been launched after a year-long project to train dozens of “citizen journalist” contributors.

The first issue of The Eclipse, which covers the North-East of England, has been published after a project which saw trained journalists providing content alongside people from outside the industry.

The free newspaper has been delivered to 10,000 people across Newcastle, Gateshead and South Shields, and aims to give a voice to vulnerable people in the region. 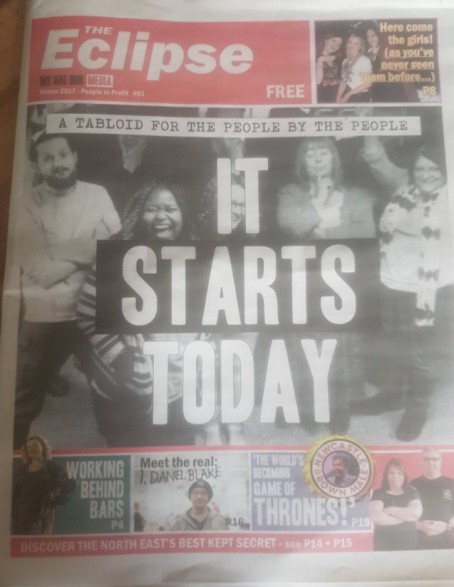 Jessie and Andrew have been developing The Eclipse for over a year as part of a project called We Are Our Media, which provided training to around 40 people in “citizen journalism”.

The first edition was published on Friday and featured around 35 different contributors, including photographers, researchers, writers, graphic designers, illustrators and editors.

Those writing for the paper include carers, grandparents, mums, school teachers, charity workers, artists, campaigners and mental health workers are also the ones who investigate, write and produce the content alongside trained journalists and ex-newspaper staff.

Jessie is the former boss of A Way Out, a charity based in Stockton-on-Tees which helps vulnerable women and young people.

Describing her motivation for launching The Eclipse, she said: “Running a charity that worked with some of the most vulnerable people in society, I was often left outraged by the way the tabloids portrayed the type of people we were working with.

“Yet when I looked into to it, many of these papers were run by billionaires, who had no connection with ordinary people so it was unsurprising they had a seemingly one-sided view of society.

“We decided to create an alternative newspaper, to give a platform to the many stories and issues that weren’t being adequately covered, from an ordinary person’s perspective.”

The Eclipse also features an ‘alternative page three’, which shows a full page photograph of a mother breastfeeding her baby.

The paper will be published quarterly, and it is now seeking donors to help raise £10,000 so that a second issue can be produced.