Editors past and present were among those to speak at a celebration of a daily newspaper’s bicentenary.

Figures from across Scottish society met in Edinburgh to mark 200 years of The Scotsman – including MSPs, some of the newspaper’s subscribers and advertisers.

Ex-editors Magnus Linklater, John McLellan and Tim Luckhurst were also among those present at Wednesday’s event, held at the Scottish Parliament.

A drinks reception allowed guests to browse historic copies of The Scotsman and look at the work of the title’s stable of photographers. 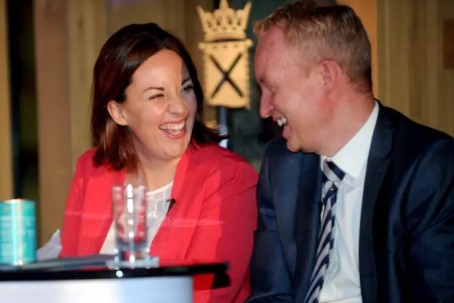 Scotsman editor Frank O’Donnell with Kezia Dugdale at the celebration

In his opening address, current editor Frank O’Donnell described the evening as “an opportunity to look back, but also to look forward at what The Scotsman means in 2017 and beyond”.

Frank added: “I grew up delivering the Edinburgh Evening News and The Scotsman, I have read them since I was a boy

“I am passionate about the part they can play in making Scotland a better place to live, to work, and to do business.”

Speaking at the event, Magnus recalled in particular the paper’s coverage of the 1988 Lockerbie air disaster.

He said: “I raced back to the backbench that night from a black tie dinner in the Borders.

“It was a truly awful night, but the staff filed five editions, which is testament to the paper’s extraordinary qualities.”

There was also a panel debate which addressed the print and digital media among other issues.