The Caerphilly Observer has confirmed its departure from Impress, which is so far the only press regulator to have received official Royal Charter backing.

The Observer was founded as an online outlet in 2009 by Richard Gurner, formerly of Brighton daily The Argus, before expanding into print in 2013 in a reverse publishing venture.

While most of the local press industry signed-up to the Independent Press Standards Organistion (IPSO), the Obsever was one of a number of hyperlocal publications which chose to join Impress. 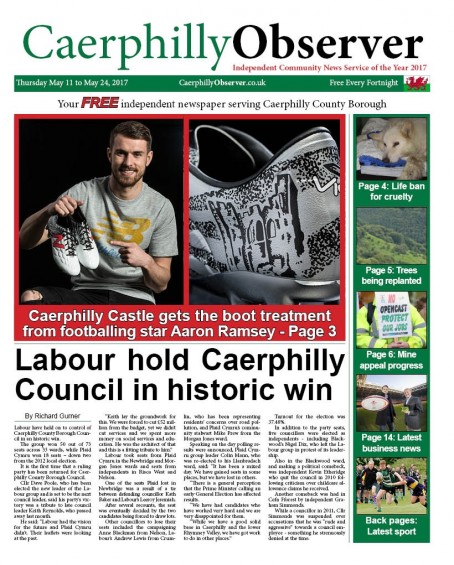 The Observer, which celebrated its 100th edition as a fortnightly paper in May this year,  issued a “resignation notice” to Impress last month over concerns about a lack of “transparency and openness” following an investigation into the watchdog’s board members.

Richard told HTFP: “Following reports in the trade press of an investigation undertaken by Impress into tweets made by certain board members, we wrote to Impress on 6 October to tell them of our intention to resign and cited a breach of the agreement we signed.

“We weren’t told about the investigation nor its outcome and felt there could have been more transparency and openness from an organisation that promotes such ideals.

“As such I felt that we couldn’t continue to be regulated by them.”

The NMA, the trade body for the regional and national press, had argued that the Press Recognition Panel “erred in law” in its decision to do so by concluding that Impress meets its criteria of being an “independent self-regulatory body”.

It has since said it will be seeking leave to appeal to the Court of Appeal following the judgement.

Impress chair Walter Merricks said: “We can confirm that there are no regulatory issues outstanding and we have no concerns about the standards of journalism at Caerphilly Observer.

“We regret the Caerphilly Observer’s decision and wish Richard Gurner and his team well for the future and thank them for being one of the first members to join Impress.”