A regional daily editor has praised readers who donned football shirts to raise awareness of the newspaper’s campaign to save one of its patch’s most famous exports.

As HTFP reported on Friday, the Norwich Evening News had called on supporters of Norwich City to wear replica shirts featuring the logo of Colman’s Mustard at Saturday’s match against Hull City.

The Evening News is campaigning against plans by drinks giant Britvic to close its manufacturing plant in Norwich, where Colman’s Mustard is produced by Unilever on the same site.

Colman’s was the club’s main shirt sponsor between 1997 and 2001, and readers dug out replicas from that era to show their support for the campaign.

Around 11,000 people have so far signed the paper’s petition against the proposal, which has put 350 jobs at risk and threatens to end a 200-year association between Colman’s and Norwich.

The City fans’ support for the campaign provided a splash for the Evening News yesterday. 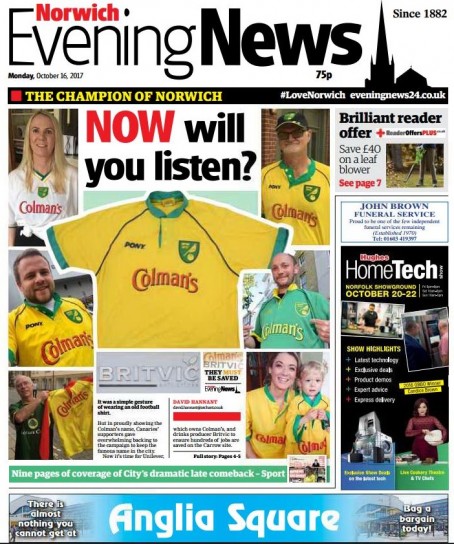 Editor David Powles said: “We were delighted with how our readers engaged with the campaign. This proves how passionate we are in Norfolk about making our voices heard and shows we won’t stand for such an important part of our history being taken away from us.

“However, the campaign does not end here and we will continue to pile pressure on both Britvic and Unilever and show how valued their factories are here.”