An editor involved in a prospective four-way “newspaper war” believes there may be room for all titles involved to survive.

Since the Chronicle ceased publication in August, with the loss of 49 jobs, three titles have emerged to cover its former patch – the Reporter, Newsquest weekly the Oldham Times and a new Oldham edition of the Manchester Evening News.

The Reporter is run by Ashton-under-Lyne-based Quest Media, which already publishes the Tameside Reporter and Glossop Chronicle, as well as owning community radio station Tameside Radio. 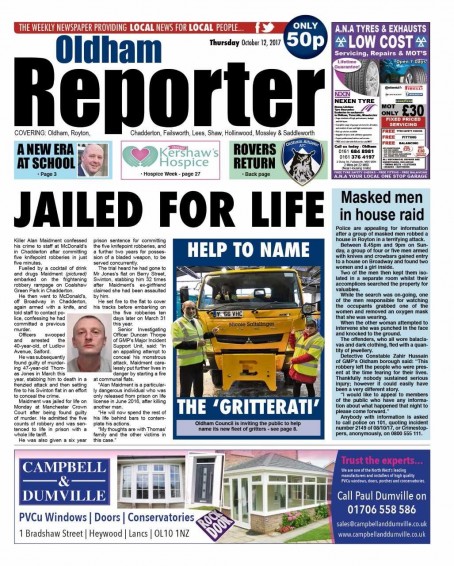 As first reported by HTFP yesterday morning, the Chronicle is set to resume publication under the ownership of Revolution 96.2 although no date has yet been set for when it will be back on the news-stands.

The new owners have also yet to decide whether the 163-year-old title, which had an average daily sale of 6,408, will continue as a daily publication or go weekly.

Commenting on the deal, Nigel told HTFP: “As a newspaper man for 30 years I will say it’s fantastic. Although it’s interesting being involved in a newspaper war, I don’t feel we are.

“We may well have even found a niche in which we can all survive. I don’t know if it’ll come back as an evening, but there will be a market for the Chronicle when it comes back. There may be room for all of us.”

Nigel, who also edits Quest’s other print titles, said the Reporter had been well-received since it launched last month and described Oldham as having an “insatiable appetite for newspapers”.

The 50p paper currently has a print run of 5,000 copies, a number which could increase in future, while  a new full-time member of staff could also be recruited further down the line.

Added Nigel: “We’ve only had very positive reviews for the paper – positive for news and especially positive for our sport coverage which does set us apart slightly.

“As we’re next door to Oldham, there’s lots of crossover and we have between 10 and 12 pages of sport.

“It’s been well received by advertisers because they advertise here in Tameside, and they would then go in to the Oldham Chronicle. Now they know that they’re able to advertise in three areas with us.

“The cover price has been well received. It’s the cover price for our other titles and we don’t have any intention of altering that.”

Chris Morley, Northern & Midlands organiser at the National Union of Journalists, has also welcomed the deal for the “highly respected” Chronicle.

He said: “The suddenness of the collapse of the Chronicle under previous ownership was traumatic for staff and we as a union are working hard to secure the best for our members from that collapse.

“Clearly there was a wealth of journalistic experience and talent that had worked hard for the community that was laid waste at the time.

“We will be seeking talks at the earliest opportunity with the new owners to see how we can best move forward.”

Of the launch of the new Oldham edition of the MEN, editor Rob Irvine said: “The response from both the retail trade and public to the Manchester Evening News Oldham edition has been very welcoming and positive.

“We have seen growth in both 6-day per week home delivery orders and casual sales, which continue to show growth four weeks after the edition launched.”