A regional daily is urging readers to wear 20-year-old football shirts as part of its campaign to keep one of its patch’s most famous exports in the city it serves.

The Norwich Evening News is campaigning against plans by drinks giant Britvic to close its manufacturing plant in Norwich, where Colman’s Mustard is produced by Unilever on the same site.

The proposal has put 350 jobs at risk and threatens to end a 200-year association between Colman’s and the city.

Now the Evening News wants fans of Norwich City Football Club to show their support for the campaign by donning shirts bearing the Colman’s logo at tomorrow’s match against Hull City.

Colman’s was the club’s main shirt sponsor between 1997 and 2001, and the newspaper has called on readers to dig out replicas from that era and wear them at the game.

The NEN splashed on the drive yesterday. 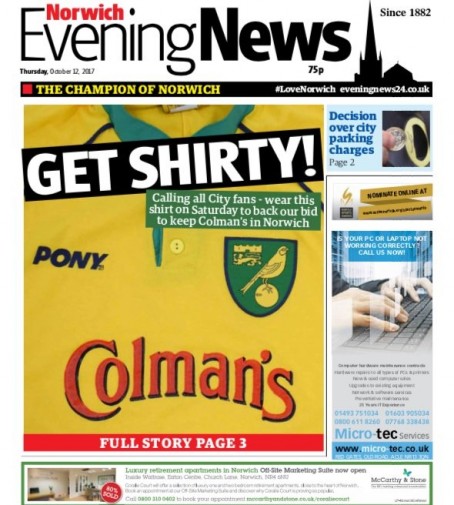 So far more than 10,000 people have signed the paper’s petition against the proposal, meaning the government is now duty bound to respond.

Editor David Powles told HTFP: “The idea was actually the brainchild of our business editor Mark Shields when we were discussing what next for the campaign and how to try and get Norwich City fans involved in the campaign.

“We’ll have staff at Carrow Road on Saturday getting people to sign our petition and pose in their shirts. The early response has been very promising.

“With more than 10,000 signatures in a week this is a campaign that people really seem to be behind – no wonder given these are two important employers and brands for the city.”

In a comment piece on the subject, David wrote: “I was at the launch of the Norfolk Community Foundation’s Vital Signs report when our head of news Ian Clarke texted me about the news Britvic was looking to close its Norwich office, with the loss of around 250 jobs.

“That was bad enough, but just two hours later Unilever followed up with confirmation this means they too will have to assess the future of their base at the same site. A site which has, for 200 years, been home to Colman’s Mustard.”

He added: “Of course business doesn’t work on emotions. But businesses should see the benefit from being seen as a good, stable employer and having intrinsic links in a community. We will be doing all we can to convince Unilever and Britvic that their futures belong in Norwich.”