Daily reporter known as ‘Nugget of the News’ dies aged 61 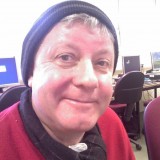 A former daily chief reporter known as the ‘Nugget of the News’ has died suddenly at the age of 61.

Tributes have been paid to Chris Nixon, left, who worked on the Scarborough Evening News for his whole career.

Chris began as a cub reporter on the News aged 17, and had continued to provide tip-offs for old colleagues after a 2008 stroke forced him to stop working full-time.

Scarborough News editor Ed Asquith, who has previously hailed Chris as one of the best journalists he ever worked with, described him as a “tremendously engaging, witty, lively, informed and knowledgeable character.”

“He belonged to a former era of the local newspaper world. He had the ink of the press in his veins, the best contacts-maker and newshound,” he said.

“He was a unique senior reporter, deeply skilled in traditional news-gathering. He liked to be called ‘Nugget of the News’ and he was.

“He was also the ever-young life and soul of the party at any gathering. One of the Scarborough characters we will remember with a smile.”

Friend Gilly Collinson said: “I first met Chris in 1995, when I took on the job as media communications lead for the Scarborough NHS trust.

“He was the ultimate local Scoop, and I lost track of the number of times that hospital managers would be trying to hush up some latest disaster and the first I would know about it would be when Chris asked me for an official quote.”

Former colleague and friend Damian Holmes added: “He taught me so much about news and how everyone had a story, and he was constantly alert to anything that would make ‘a page lead for tomorrow’.

“He was without doubt the best news reporter I’ve ever worked with. He was also clever, witty, funny, and he had a huge heart. He will be missed.”

Chris is survived by his mother Anne and son Luke, who described his father as a “highly intelligent and loving man””

A funeral service and cremation will be held at Woodlands Crematorium, in Scarborough, on Wednesday 3 January at 11.20am.

Donations in lieu of flowers can be made in memory of Chris, for Scarborough’s St Catherine’s Hospice.

A former editor of the Scarborough News, Neil Speight, has penned his own personal tribute to Chris which we publish in full below.

As we approach Christmas and a time of great joy and happiness, it was so sad to learn through Damian Holmes’ kindly worded and thoughtful private message overnight to those who knew Chris Nixon, of his death.

A Sunday morning is often a contemplative time (not least trying to remember what you did during the Saturday night boozing – something I am sure Chris often did) and I have spent mine thinking about a man who certainly wasn’t without his faults, but one who had a lasting and endearing impact on most of those who knew him.

There will be a lot of us sharing a lot of memories of the man affectionately known as Nugget of the News – or that bastard Nixon, depending on your viewpoint!

My memories of Chris go back a long way. My family moved to Scarborough in 1970 and my dad, Irving, who was a golfer and a Wessie, immediately found a kindred spirit in another exile, Chris’s dad Joe. They became good friends and through that I knew about Chris.

As I went through school and then sixth form, I was desperate to get into the world of journalism and I contacted the Evening News and enquired about getting some experience or financial support to get through college but I was told that they had just taken on a young trainee journalist and so, not for the first time in my life, I found out Chris Nixon had got there first!

As someone who regards himself as a Scarborian (albeit a honourary one, not by birth) I always read the Evening News avidly and so I followed the path of Chris as his news-gathering career grew. He was everything that a good – no, I should say outstanding – local news reporter was. He was always challenging and asking questions and, as an exemplar to all young journalists he knew every inch of his patch and he made it his business to get to know everyone who mattered. And if that meant having a few beers with them, so much the better!

In 1991 I was honoured to be able to return to Scarborough as editor of the Evening News and inherited, I am sure people who were there at the time would agree, a pretty dispirited newsroom who hadn’t been managed particularly well and they lacked a bit of encouragement and direction.

I remember being briefed by Russell Hole, who was MD at the time, about the editorial team as he welcomed me and he said one of the key ‘problems’ I had to sort out was Chris. I wish I had many such problems!

What I instantly knew upon talking to Chris was that he was still passionate about journalism, passionate about Scarborough and 100 per cent committed to the Scarborough Evening News. Yes, he could be difficult and I instantly knew his forte wasn’t being a leader, it was being a doer. Not that being a doer didn’t stop him leading people by example, or passing on his skills, or sharing his commitment to the job. He was the sort of character that every good newspaper needed, you could rely on him stepping up to the mark when it really mattered – and if the odd moment came and went when he caused a problem, it was a price well worth paying.

I gave him free rein to be the paper’s investigative leader, to tackle stories and issues he felt were important and to show the other young trainees we took on what being a reporter was all about.

You couldn’t have anyone better for that role than Chris. That is shown today in the many tributes to him from those who worked alongside him and viewed him not just as a friend, but as an inspiration and as a teacher. When Andrew Norfolk won the British Journalist of the Year accolade in 2016, the first person he paid tribute to was Chris. Andrew wouldn’t have become the reporter he is today, one of the very best in his field, were it not for Chris Nixon.

And there are many others in the industry today who will have the same experience. Of course one of those was the much-loved Ian Laws, another we lost far too early.

Everyone will have a Chris Nixon story, and those much closer to him than I will have hundreds, but whenever I think of Chris I think of Holbeck Hall. Not because of what he did, but what he couldn’t because he was on holiday on a Mediterranean isle, champing at the bit to get back as he watched Scarborough make worldwide headlines on the TV (in a bar of course). One of the few big stories that got away from him – but no fault of his…

Though I moved on from the Evening News I still followed what happened from afar – and from close quarters when I launched the Scarborough Town Crier. There were some at the News who regarded me launching that paper as an attack on them for some reason, being suckered into the silly JP propaganda, but not Chris. He saw it as good for the town that there was competition, as a challenge, not a threat.

And sadly, of course, he was cruelly struck down by a stroke. I remember going to see him in hospital (and though I shouldn’t have, I remember sneaking in a bottle of something – more as a gesture than anything else) and I saw from the gleam in his eye that he would battle on.

His problems were debilitating and frustrating and in the early years it was very, very tough for him but being Chris, he came through it and though I am now hundreds of miles away and only very rarely get back to the borough, I followed his posts on Facebook with great joy and admiration for his spirit. His Friday sojourns to the Crown or other local hostelries were things of legend.

And only last week, as the weekend approached, he was planning another and was so looking forward to being with close friends, one of course being Damian.

How many of us today would wish we could turn back time and have joined him following his last post, exhorting us to the Crown and then into town?

Rest in peace Chris Nixon, it was an honour to have known you, a pleasure to have worked with you and a blast to have drunk beer with you! The man may be gone, but the legend will live on for so many.