A regional daily has raised thousands of pounds for the families of six people who died in a “shocking” car crash on its patch.

The Birmingham Mail launched an appeal after covering the crash, which has also left a seventh person in a critical condition in hospital.

The Mail managed to provide rolling coverage of the incident, which happened at around 1am on Sunday, while the newspaper’s new city centre was being prepared following its departure from its former Fort Dunlop home on Friday.

It has since run a piece on reader anger over controversial photographs showing bodies strewn across the carriageway, which have been allowed to remain on Facebook. 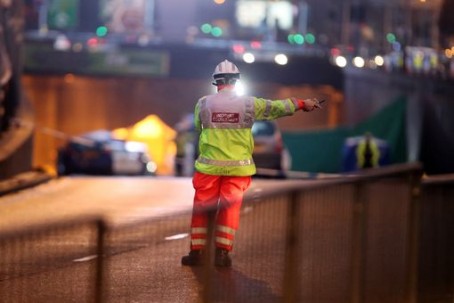 The scene of the crash in Birmingham city centre

The Mail itself decided against using any graphic pictures from the scene.

A Just Giving appeal was also set up by the Mail in conjunction with the Lord Mayor of Birmingham’s Charity.

Editor Marc Reeves said: “When you get an incident as shocking as this it’s really important to try to reflect the feelings of readers and be sensitive to the victims and their families.

“Social media was full of the most upsetting pictures so we were especially alert to ensure any pictures we used didn’t inadvertently contain graphic images from the scene. We also took a decision not to over-use pictures of the crashed vehicles or to use any of body bags.

“Our live editorial team did an incredible job – especially as they couldn’t use our new city centre newsroom, which was being commissioned over the weekend. The rolling coverage on our liveblog was complemented by a very moving first interview with the family of [crash victim] taxi driver Imtiaz Mohammed by our reporter Stephanie Balloo.

“There was a massive reaction from readers who wanted to know what they could do to help, so by midday we had launched a Just Giving appeal in conjunction with the Lord Mayor of Birmingham’s Charity. We’ve made a donation from the Birmingham Mail’s Charitable Fund and the total raised for the families now stands at more than £2,500.”