A double rapist who tried to kill his victim by smashing her over the head with a concrete slab has been named thanks to a legal challenge by journalists.

The Leicester Mercury backed a successful application for a judge to lift an order protecting Charlie Pearce, who smashed a woman over the head with a slab then raped her twice as she lay injured in a park.

Pearce had pleaded guilty to the sex attacks and seriously injuring his victim, but had remained anonymous until a media application to lift the order was made after a jury also found him guilty of attempted murder.

The application to lift the naming ban, which had been issued under Section 45 of the Youth and Criminal Evidence Act 1999 because of Pearce’s age, was made by the Press Association’s Matt Cooper and BBC East Midlands Today, with the backing of the Mercury.

The Mercury published a police photograph of Pearce on its front page on Friday, following the previous day’s guilty verdict.

He will be sentenced in the New Year. 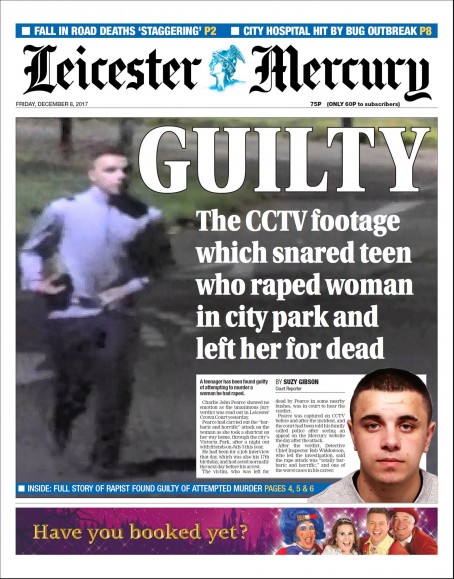 The court heard Pearce had been out celebrating his 17th birthday on the night of the attack, which took place in Leicester’s Victoria Park on 3 July this year, and the jury was told he was “fixated” on violent and controlling sex attacks – which he researched on the internet in the days and weeks beforehand.

Pearce’s defence counsel had opposed naming their client, saying he had twice tried to kill himself while in custody and that he should have protection.

Junior counsel Thomas Schofield, defending, also said the defendant’s welfare was a consideration because he was facing a long sentence and would not be back in society for some time, but suggested he could be named after he turns 18 next July.

In reaching his decision, sitting judge Mr Justice Haddon-Cave said he did not see why the several months made any difference in preserving Pearce’s anonymity until then.

Mercury court reporter Suzy Gibson, who covered the trial, said: “I am very pleased the judge lifted the order. We would not otherwise have been able to use the incriminating footage of the defendant in the park, that was shown to the jury.

“We couldn’t have reported that he had twice raped and attempted the killing on the very night of his 17th birthday (as he could have been identified from that information).

“It was such a heinous crime that many people in the community were left deeply shocked. The public had a right to know who in their midst was guilty of such an appalling life-threatening attack – and the judge seemed to accept that.

“It would have been an injustice to society, for Pearce to have escaped from public scrutiny for his dangerous wrongdoing, by hiding under the legal umbrella of anonymity in this particular case.”