A regional publisher says it is working urgently with Google to understand how a “distasteful” survey asking readers to choose their favourite image from a set of children’s photos appeared on a story about child sex abuse.

The Google survey asked readers of Gazette Live – the online channel for the Teesside Gazette – to pick the the image they liked “best” in order to access a story headlined: “Cleveland Police investigating 20 to 30 historic child sexual abuse cases.”

The issue came to light after it was spotted and subsequently tweeted by a national newspaper journalist, Alexi Mostrous, who is head of investigations on The Times.

He tweeted a screengrab of the image with the message: “What kind of screwed-up algorithm is responsible for asking readers to select which child they ‘like best’ before displaying a story about child abuse?” 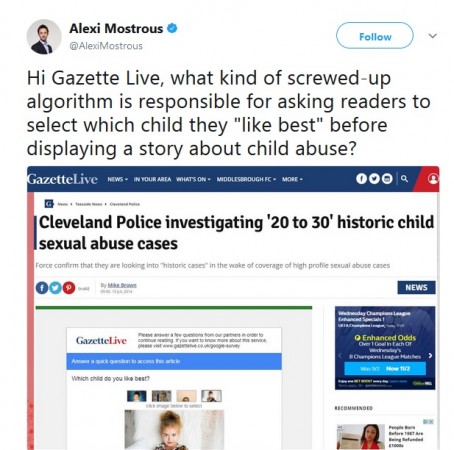 Publisher Trinity Mirror asked Google to disable the survey within minutes of being notified of it.

A spokesman said the company was now “working with Google to urgently understand the details of the creative and how it appeared on our site”.

Google Survey is a market research tool which enables businesses collect data from online users for a fee.

Many regional newspaper websites have signed up to host the surveys in return for a share of the revenue generated.

A Google spokesperson said: “Google Surveys provide businesses with a simple platform for conducting consumer research to inform marketing decisions, such as testing which image would work best in a marketing campaign.

“While we don’t believe at this time that the survey was the result of any malicious behavior, we quickly recognised that it was distasteful and the survey has been removed.”