A campaign by a weekly newspaper to find 100 apprenticeships for young people has been hailed a success after exceeding its target by almost 50pc.

The independently-owned Southwark News launched a drive in September to secure 100 apprenticeships for local people in 100 days – to tackle the high levels of unemployment in the area.

And the newspaper managed to surpass its target after securing apprenticeships for 149 young people during the period of the campaign, publishing a 12-page supplement to highlight its success.

Its bid to find apprenticeships was launched in partnership with the National Apprenticeship Service and mirrors similar campaigns which have been run across the regional press. 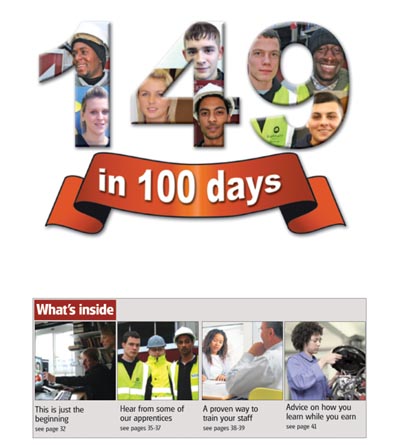 In the News’ supplement, joint managing director Kevin Quinn wrote: “Forty-three employers have created 149 apprenticeship opportunities in Southwark in just 100 days – a feat that is all the more remarkable given the current economic climate.

“This collective commitment from our business community proves beyond a shadow of a doubt the real desire out there to employ locally.

“Exactly 100 days ago the ‘News’ threw down the gauntlet to get 100 apprentices in 100 days, and to succeed this target by almost 50 per cent (49 apprentices) gives us real hope that the tide could be turning, taking Southwark from the bottom of the pile in employment figures to a borough that could be a real success story.”

The paper’s campaign aimed to encourage businesses to take on apprentices by showing them how easy it could be to arrange.

It plans to continue highlighting the apprentices who have been taken on in the coming weeks and months, while urging more businesses to explore the benefits of them.