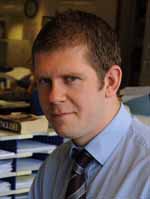 A weekly newspaper editor has been promoted to take charge of a series of eight titles across two counties after less than nine months in his current role.

James Mitchinson, left, who was made editor of the Worksop Guardian last summer, will now become group editor for Johnston Press weekly titles in Lincolnshire and Leicestershire.

His new role starting on 21 March will see him take direct editorial responsibility for the Grantham Journal and Citizen, while the editors of the Melton Times, Sleaford Standard, Boston Standard, Horncastle News, Market Rasen Mail, Louth Leader and Skegness Standard will all report to him.

James joined the Worksop Guardian in 2002 as a trainee reporter and has risen through the ranks, becoming editor last summer when George Robinson stepped down after 18 years to sell antique toys.

He said: “I am delighted to have been given the opportunity to lead the award-winning Grantham Journal and its associated titles.

“To play my part in the history of the Journal and the people it serves will be a privilege, and I couldn’t be more excited about taking up the challenge.

“My decade at the Worksop Guardian has been an apprenticeship without equal. I owe an awful lot to the people I’ve worked with, who have never settled for anything but award-winning standards in journalism.

“I wish the team good luck – but I know they don’t need it.”

James added the highlight of his time at the Guardian had been helping lead the paper’s coverage of the Neil Entwistle double murder trial, for which the paper won editorial team of the year at the O2 Media Awards for Yorkshire and The Humber.

His promotion to group editor was announced earlier this month by Richard Parkinson, managing director of East Midlands Newspapers, who James will report to.

He told HTFP: “James will have overall responsibility for some strong weekly newspapers and their associated websites. I’m looking forward to working with him in his new role.”