A trainee journalist only months into his job has been presented with an award in memory of a young reporter who died tragically in 2005.

Jamie Brooks, who works at the Chard and Ilminster News, was given Newsquest Somerset’s Young Reporter of the Year Award.

He was presented with the Leanne Gibbons Rose Bowl in memory of 23-year-old Leanne, a trainee reporter at the News’ sister paper the Somerset County Gazette, who died in 2005 after developing pancreatitis.

Jamie started at the title in July last year after completing an MA in Journalism at Brunel University, which is accredited by the National Council for the Training of Journalists. 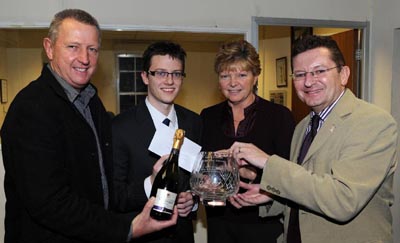 Jamie said: “I have really enjoyed my first six months at the News. The award was a total surprise and a big honour.

“I would not have got to where I am now without the NCTJ. The qualifications and training I received in shorthand, media law and public affairs allowed me to get my foot in the door at what is a difficult time in the job market.

“The MA course at Brunel University was really forward thinking in providing additional skills, such as search engine optimisation and using Twitter to find stories – which are now coming in handy.”

Editor-in-chief Ken Bird added: “Jamie has made an impressive start to his journalism career and long may it continue.”