A regional daily is launching a campaign against government spending cuts, amid fears its local councils have been unfairly targeted by grant reductions compared to their southern counterparts.

The Manchester Evening News has teamed up with politicians from councils in the area to demand a fair share from the government in the wake of 6,000 job losses at authorities in Greater Manchester.

It is backing a petition which will be launched by Manchester City Council this week after it had a grant cut of 21pc, leaving it needing to make savings of £110m.

And the title is urging people across the region to sign it to protect local services and jobs – putting a form on its front page, pictured below, for readers to show their support. 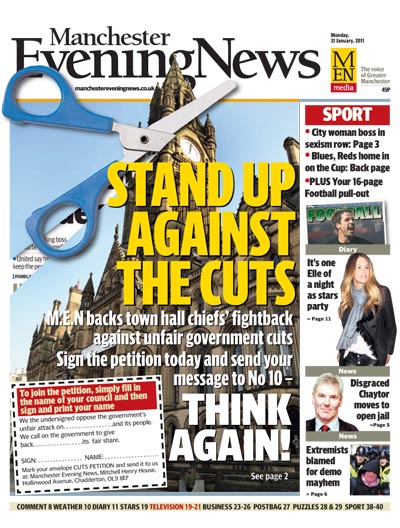 The paper says the cuts in grants given to councils are unfair because nationally they will lose an average of 15.2pc of their funds over the next two years, but nine out of the 10 local authorities in Greater Manchester will lose more than this.

A comment piece for the campaign’s launch said: “The huge cuts facing councils across Britain are manifestly unfair to Greater Manchester. Put aside the usual political row and look only at the facts.

“Manchester and Rochdale face cuts to their budgets of more than 20 per cent over the next two years, despite having some of the poorest neighbourhoods in the country, which rely most heavily on public services.

“Buckinghamshire, Surrey and Dorset, meanwhile – places no one could describe as poor – will lose just eight per cent or less. This simply cannot be right.

“It is for this reason that the M.E.N today calls on our readers to back a petition demanding that the government gives us back our fair share.”

Manchester City Council wants the petition to be the biggest the region has ever seen and the leaders of other local authorities have also pledged their backing.