A regional daily has been praised by an MP after its campaign to save a retirement complex from the axe was a success.

The Burton Mail has been running a campaign for the last five months to save Elizabeth Court, a sheltered housing scheme in Winshill, from closure by owners the Anchor Trust.

It started a petition against the move which gained more than 3,700 signatures, as well as running numerous stories about the plans.

And its campaign has now been hailed a success after the Anchor Trust agreed to transfer ownership of the complex to local housing association Trent and Dove. 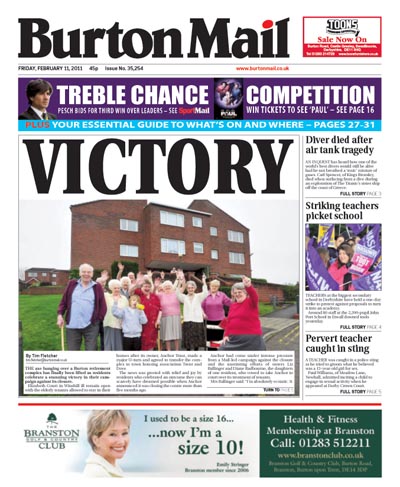 Burton MP Andrew Griffiths said the paper could claim “It’s the Mail wot won it” after the success of the campaign.

He said: “I’d like to pay tribute to the Burton Mail for its unstinting support for the residents and in giving the campaign such a strong voice.

“Anchor admitted to me that they were staggered by the publicity and support shown to the residents by the Mail and I don’t think they had ever come across such a campaign in their history.”

The paper said Anchor had failed to look at alternative options for the complex and its investigation revealed that of 14 homes suggested as alternative accommodation for residents, just two had vacancies, while some had not even been built.

Reporter Tim Fletcher led the campaign for the paper and said it was “very gratifying it’s had such a positive outcome”.

Editor Kevin Booth added: “The closure would have meant people in their 80s and 90s being uprooted from the homes they have enjoyed for many, many years.

“It wasn’t about the closure of a housing complex. It was about the destruction of a community.”