It must have been one of the biggest stories in the last 18 months for the Rossendale Free Press.

Semi-professional footballer Matthew Edgington – an ex-winger of Rossendale United and at the time a popular player for Ramsbottom United – was left partially blind and brain-damaged after a vicious attack outside a Manchester nightclub back in November 2009.

His slow steps to recovery and the ensuing prosecution have produced regular reports ever since, with his two assailants finally jailed for 14 months each at Manchester Crown Court on Friday 25 March.

Frustratingly, Friday is publication day for the Free Press and so that week’s edition was already on sale when the pair were sentenced.

The case was well covered in the Manchester Evening News, Lancashire Telegraph and other print, broadcast and online media, including some of the nationals.

So I was pleased to see that the Free Press news desk took this timing on the chin, and worked hard to drum up a new line for what they decided – rightly in my mind – was still worthy of their own page one the following Friday, 1 April.

The eventual Free Press intro was nosed on the footballer’s angry dad’s comments that “nothing would be long enough” as a sentence for the damage and misery the pair had caused. 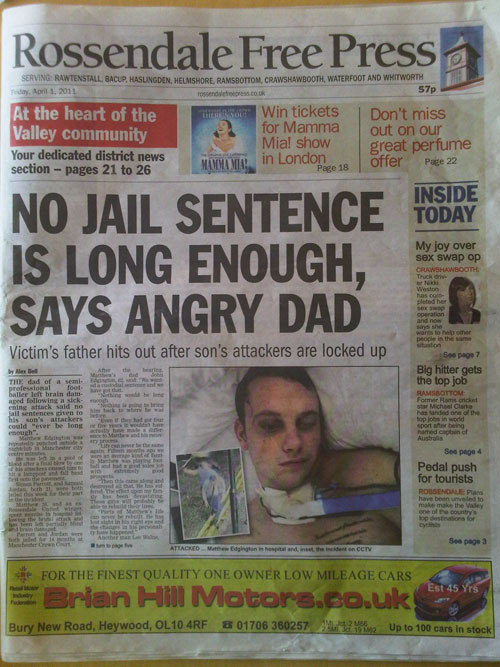 Matthew had lost his job, his playing career, his girlfriend, the sight of one eye and a large chunk of his personality because of the attack, his dad argued, whereas those responsible “will probably be able to rebuild their lives”.

The Free Press carried plenty of emotive comment from the dad, turning the story to page five for a recap of the court case.

So far so good, but I was left wanting much more, because although the ‘new’ angle was probably the right one, there was not enough in the actual story to get my teeth into.

Detailed backgrounders, I thought, could have been commissioned on the attack as described in court, along with images of his attackers, words and pictures describing Matthew’s playing career and supportive quotes from former teammates of his two local clubs.

The splash was also poorly subbed, with the second par reading: “Matthew Edgington was repeatedly punched outside a nightclub in Manchester city centre minutes.”

And the Free Press should also have been more careful to carry full facts:

•it missed mentioning Matthew’s last club, Ramsbottom;
•it omitted the area Matthew was from – Walshaw near Bury, ‘out-of-town’ for the paper but still worth telling readers;
•there was no mention of the date the attack took place; and
•the positive detail that Matthew and his dad plan to climb Ben Nevis for charity was missing – a story covered the week before, but nothing wrong with recall.

Am I being too tough? Maybe, but given they had decided it was still worth a splash and the fact they had a week to prepare, I thought the Free Press could have turned to a meticulous double-page spread, making sure that readers felt they gave the very best coverage.

Anyway, my main point is that it was a good splash, strengthening an already competent page one which had plenty of interesting reader entry points.

Inside, there was a good variety of news ranging from “Ski centre costs council £33k to close and secure” on page three, revealing the irony of security bills for mothballing a leisure venue to make larger savings, to “Trucker is ‘complete’ after sex op” on page seven, a fascinating follow-up story on a local’s sex-change ordeal.

But I was a little confused at the “View from the opposition by Labour leader Alyson Barnes” on page 16… there was no view by the council leader and no standfirst explaining this was part of any series.

As well as borough-wide issues, there was plenty of hyper-local detail in a six-page district news section on pages 21 to 26, although I thought these could have been better-grouped with the hotchpotch of micro-content found on page 14.

This latter page was made up of a half page of six local ‘Obituaries’, a quarter page of ‘Club News’, a mini ‘Food Review’ and a gem of down page snippet entitled ‘Landlady of the week’. Plenty of hard work getting all this detail, but seemingly thrown together and therefore a little bit lost.

The overall design was fine and easy to read, but I did think urgent remedial attention was needed on page two, where ‘The big picture’ from readers, a house ad, an index and a squeezed news lead looked very messy. 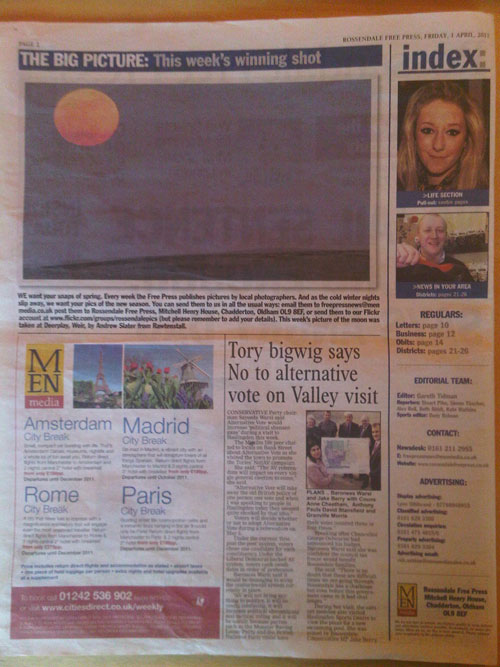 In sport, it was great to see a very local paper concentrating on very local leagues, with reports on Ramsbottom, Bacup and Rossendale in the Vodkat Premier Division dominating half the space available, with the rest covering grassroots rugby, cricket and golf.

The 48-page main book was made up of 22 news pages, containing 98 stories, with six pages of sport hosting another 18 tales.

There was also a 12-page ‘Life’ pull-out made up of seven-day TV listings, a food and drink spread, gardening, outdoor walks, books, films, a puzzles page and a local what’s on listings page – illustrated with eight smiley ‘Nightlife’ pictures from a local pub.

Another 20-page pull-out contained a useful property section, albeit with an awkward looking masthead title of ‘thehomesmine.co.uk’.

Yet wherever I went I saw it being read – at both the White Lion and The Old House at Home in Rawtenstall – and it had a prominent counter presence in two Bacup newsagents I popped into.

However, a couple of influential folk I spoke with were very aware that the Free Press’ local office had been closed along with those of 21 other MEN weeklies and were still a bit offended that the operation was now run from Oldham.

Whatever the economics of that decision, I’d like to think that MEN Media – now owned by Trinity Mirror – enables Free Press reporters to be seen out and about across Rossendale regularly to reassure readers that they are still there