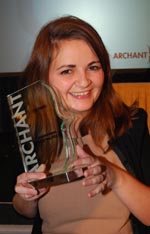 A weekly news editor has been praised by regional publisher Archant as its top journalist.

Katie Davies, left, of the Hampstead and Highgate Express, was recognised as the Editorial Person of the Year at an awards ceremony held by the company.

She was praised for being a ‘leading light’ in developing social media networks when she won the same title at Archant London’s awards, which allowed her to go forward to the company-wide ceremony.

Katie was among staff from across Archant who were honoured at a lunch in London, when chief executive Adrian Jeakings admitted the last two years had not been easy – but said the group had delivered some ‘extraordinary achievements’.

He said: “The successful completion of the first stage of the editorial content management system is a fantastic achievement.

“We understand that nobody else in the world has come close to what we have done, in integrating our print and web content management systems across our full newspaper portfolio.”

He added he expected a number of Archant’s newspapers to post increases in circulation for the second half of 2010.

Further winners at the ceremony included Nicholas Hitchens from the Gravesend Reporter, who was named the Unsung Hero of the Year.

The East Anglian Daily Times’ Saturday edition was chosen as Product of the Year for delivering a substantially improved offering to its readers and increasing circulation.

Long-term production manager Alan Doy, from Archant Production Services, took the title of Archant Employee of the Year title for his work in embracing change and mentoring colleagues in the newly-formed production services unit.

Archant Norfolk’s audience growth team were named as Team of the Year for their work to improve circulation at the Eastern Daily Press, Norwich Evening News and weekly titles.